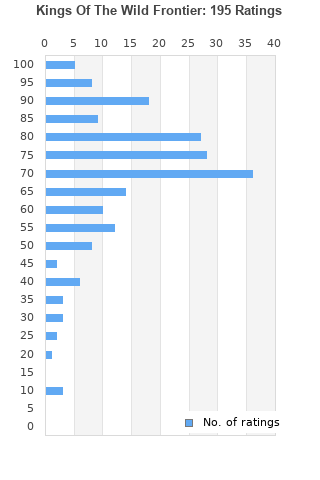 ADAM AND THE ANTS kings of the wild frontier (& catalogue) LP EX/EX, CBS 84549,
Condition: Used
Time left: 3h 44m 39s
Ships to: Worldwide
$19.99
Go to store
Product prices and availability are accurate as of the date indicated and are subject to change. Any price and availability information displayed on the linked website at the time of purchase will apply to the purchase of this product.  See full search results on eBay

Adam And The Ants bestography

Kings Of The Wild Frontier is ranked as the best album by Adam And The Ants.

Listen to Kings Of The Wild Frontier on YouTube 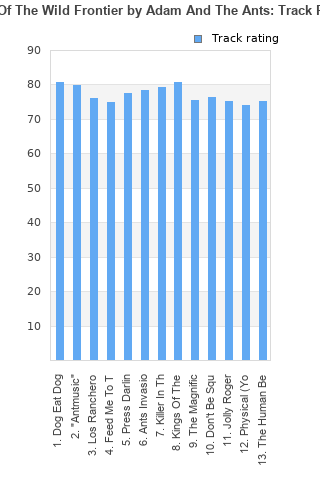 Kings Of The Wild Frontier rankings

Kings Of The Wild Frontier collection

Kings Of The Wild Frontier ratings

Rating metrics: Outliers can be removed when calculating a mean average to dampen the effects of ratings outside the normal distribution. This figure is provided as the trimmed mean. A high standard deviation can be legitimate, but can sometimes indicate 'gaming' is occurring. Consider a simplified example* of an item receiving ratings of 100, 50, & 0. The mean average rating would be 50. However, ratings of 55, 50 & 45 could also result in the same average. The second average might be more trusted because there is more consensus around a particular rating (a lower deviation).
(*In practice, some albums can have several thousand ratings)
This album has a Bayesian average rating of 70.2/100, a mean average of 69.3/100, and a trimmed mean (excluding outliers) of 70.1/100. The standard deviation for this album is 17.8.

Kings Of The Wild Frontier favourites

Kings Of The Wild Frontier comments

Some good tracks mainly the hits the filler stuff is rubbish sorry, I was a big fan as a child though from the u.k. the videos and Top of the Pops performances were great.

This album was a massive hit in the UK and one of my first post-punk albums. It got zero air play in metro Detroit where I grew up and I fail to remember it on MTV during the day. Give it a spin as most US based people only know a couple of hits when he was Adam Ant. This is his best album

A classic pop album, this is the first record I ever bought. Kings of the wild frontier, sounded and still sounds like nothing else. A fusion of punk,tribal sounds,glam rock, and,camp, Adam and his ants produce a bonkers LP which is still a lot of fun today. The hit singles, dog eat dog, antmusic, and, the title track are all excellent, as are, ants invasion, killer in the home, and, the human beings. A silly and enjoyable record. Good stuff.

I have the other uk version of this upbeat album at the forefront of new wave (incl. "making history" [65]). Reminds me of Bowie around this time.

One of the first albums I owned and loved at the time. Not an album I feel the need to pick up and listen to now, unfortunately, although still enjoyable it's not even my favourite Ants album any longer.

Great album! Strangely enough when I hear this I get elements of pirate songs, American Indian chants over an English sensibility.

Amazing. Love how it's able to make you laugh and then just immediately cuts the jugular, not an easy feat

Your feedback for Kings Of The Wild Frontier