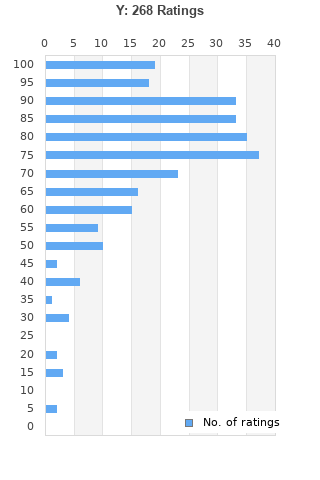 Y is ranked as the best album by The Pop Group. 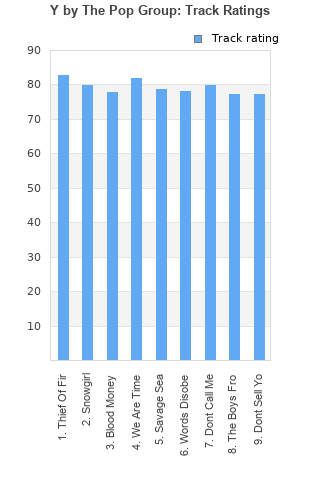 Rating metrics: Outliers can be removed when calculating a mean average to dampen the effects of ratings outside the normal distribution. This figure is provided as the trimmed mean. A high standard deviation can be legitimate, but can sometimes indicate 'gaming' is occurring. Consider a simplified example* of an item receiving ratings of 100, 50, & 0. The mean average rating would be 50. However, ratings of 55, 50 & 45 could also result in the same average. The second average might be more trusted because there is more consensus around a particular rating (a lower deviation).
(*In practice, some albums can have several thousand ratings)
This album is rated in the top 5% of all albums on BestEverAlbums.com. This album has a Bayesian average rating of 76.8/100, a mean average of 75.5/100, and a trimmed mean (excluding outliers) of 77.0/100. The standard deviation for this album is 18.1.

This album is extremely unique and I highly doubt we will get an album similar to this again. It falls into the Beefheart style of music with more of a punk twist and I think it works really well. The majority of the album sounds completely out of control and insane but the basslines are really well thought out and gives us a spine for the record. If you focus on the basslines it is difficult not to love this album as you feel like you are riding a wave while chaos ensues around you. The quality of performances as well is very high such as the guitars, drums, sax and vocal. All of these combine to create this controlled chaos which creates an interesting and experimental listen for us. Overall, while a couple songs are a little weaker and could be cut, most of the album is brilliant and well worth a listen just to experience an album as out there as this one is.

Made me mad... And defines the Zeitgeist perfectly (2022)

Some punks who listened to Beefheart and CAN and decided what they could use was more anger and funkier basslines. It's never quite clear what you're listening to, but it is a deeply emotional and at times terrifying album. Impossible to be imitated, much less surpassed. Genius or insanity? You tell me. All I know is I love it.

Everything about this album is messed up
I fucking love it.

What the fuck? Holy shit. Whoa hell. Umm, huh. Pretty cool. Structure is not. Sounds and textures are everywhere and they're weird. Listen to it, definitely. It might redefine music for you.

An album that is certainly unique, and there are definitely some enjoyable parts. But the worse parts really drag the album down, and altogether it's too meandering and minimalist for me to enjoy. I don't hate it as much as similar albums (Deceit and Suicide come to mind), but it's still not something I can envision myself listening to again. I guess overall this type of post punk is just too artsy and high brow for me.

I'm not sure I can dig this. Which is weird, because I love Suicide. Hey, it has its moments, but it feels like it's trying to be dark and brooding, and there's moments that come across as incredibly cacophonous, but the high moments made it a decent listen.

Still not sure what to make of this. Sounds like loads of people playing different songs at once. Quite mental. Beyond good and evil is a great track mind. File alongside trout mask replica, which is the only other album that springs to mind when I hear this. I don't think they quite created what they wanted. The rhetoric is better than the execution. PiL probably hit the mark better with metal box.

I don't think I understand it yet. There's a few good songs on there and some nice piano playing mixed in with some of the bat shit insane recordings, but other than that, it's hard to get into it.

Your feedback for Y