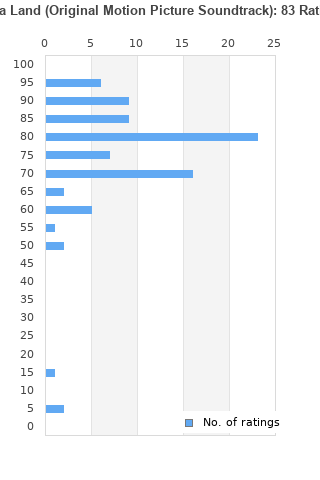 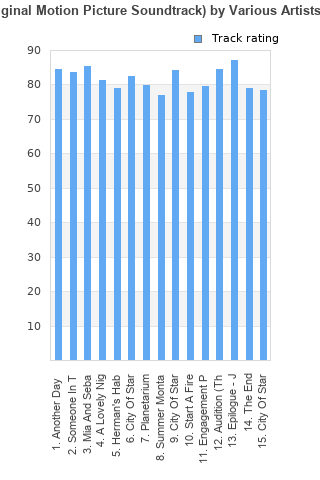 Rating metrics: Outliers can be removed when calculating a mean average to dampen the effects of ratings outside the normal distribution. This figure is provided as the trimmed mean. A high standard deviation can be legitimate, but can sometimes indicate 'gaming' is occurring. Consider a simplified example* of an item receiving ratings of 100, 50, & 0. The mean average rating would be 50. However, ratings of 55, 50 & 45 could also result in the same average. The second average might be more trusted because there is more consensus around a particular rating (a lower deviation).
(*In practice, some albums can have several thousand ratings)
This album is rated in the top 4% of all albums on BestEverAlbums.com. This album has a Bayesian average rating of 77.4/100, a mean average of 76.2/100, and a trimmed mean (excluding outliers) of 77.9/100. The standard deviation for this album is 14.7.

So the music in La La Land honestly wasn't my favorite my first couple of listens, it's pretty standard musical fare. But as of the last time I watched the movie it just started to all hit really close to home. I'm an aspiring musician and even though I'm just barely starting to step into the field I've already felt some of the anxieties and pressures depicted in this movie and, more importantly, the music itself. Following your dreams is hard, is stupidly hard. There are so many decisions that are insanely hard when it comes to finding a balance between doing what you love and what you have to do. Money, people, love, and passion don't always match together as smoothly as you would like. The real big standout for me is "Audition", and I don't think I need to explain why. Just so much heart put into everything from this movie

It's nice music, but only nice

Easily my favorite musical soundtrack of the 2010s. The songs are all heavily influenced by jazz, with the instrumentation often stealing the spotlight. That's not to say the singing and lyrics aren't great though. Emma Stone and, to a slightly lesser degree, Ryan Gosling, hit it out of the park, portraying such raw emotion every opportunity they get. The showstopper goes to Stone in "The Audition". This climactic song never fails to hit me in the feels... "Here's to the ones who dream, foolish as they may seem". Other highlights include "City of Stars", "Mia and Sebastian's Theme", and the epic, instrumental medley, "Epilogue".