We Got It From Here... Thank You 4 Your Service (studio album) by A Tribe Called Quest 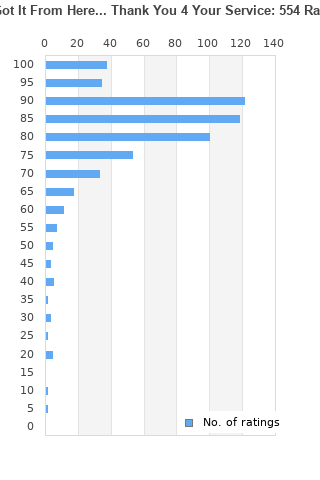 We Got it from Here Thank You 4 Your Service by A Tribe Called Quest CD MINT
Condition: Like New
Time left: 1d 8h 7m 6s
Ships to: Worldwide
$9.00
Go to store

A Tribe Called Quest "We Got It From Here... Thank You 4 Your Service" Hip-Hop
Condition: Brand New
Time left: 2d 7h 37m 59s
Ships to: Worldwide
$5.00
Go to store
Product prices and availability are accurate as of the date indicated and are subject to change. Any price and availability information displayed on the linked website at the time of purchase will apply to the purchase of this product.  See full search results on eBay

We Got It From Here... Thank You 4 Your Service is ranked 3rd best out of 11 albums by A Tribe Called Quest on BestEverAlbums.com.

The best album by A Tribe Called Quest is The Low End Theory which is ranked number 152 in the list of all-time albums with a total rank score of 11,998.

Tickets from Ticketmaster Get tickets
May
07
Fri
19:00

Listen to We Got It From Here... Thank You 4 Your Service on YouTube

We Got It From Here... Thank You 4 Your Service track list 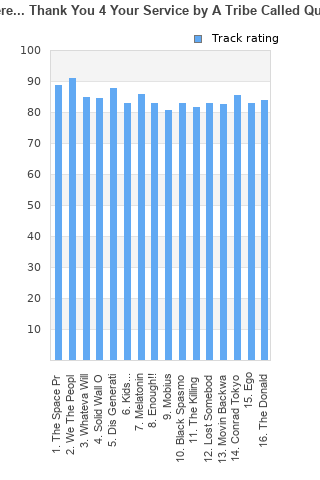 We Got It From Here... Thank You 4 Your Service rankings

We Got It From Here... Thank You 4 Your Service collection

We Got It From Here... Thank You 4 Your Service ratings

Rating metrics: Outliers can be removed when calculating a mean average to dampen the effects of ratings outside the normal distribution. This figure is provided as the trimmed mean. A high standard deviation can be legitimate, but can sometimes indicate 'gaming' is occurring. Consider a simplified example* of an item receiving ratings of 100, 50, & 0. The mean average rating would be 50. However, ratings of 55, 50 & 45 could also result in the same average. The second average might be more trusted because there is more consensus around a particular rating (a lower deviation).
(*In practice, some albums can have several thousand ratings)
This album is rated in the top 1% of all albums on BestEverAlbums.com. This album has a Bayesian average rating of 82.4/100, a mean average of 81.4/100, and a trimmed mean (excluding outliers) of 82.6/100. The standard deviation for this album is 13.2.

We Got It From Here... Thank You 4 Your Service favourites

We Got It From Here... Thank You 4 Your Service comments

A Tribe Called Quest - We Got It From Here... Thank You 4 Your Service came out 18 (!!) years after their last album - and sadly was marked by the passing of Phife Dawg, meaning there won't be another one- but at least it was worth the wait. It has to be one of the most impressive comebacks ever and easily qualifies as a fitting last chapter to their astounding legacy. The production is the absolute star of the album. They draw inspiration from various styles - pop, rock, soul, disco, reggae, R&B etc., you get the point - and use a wide range of samples -Elton John, Michael Jackson, Black Sabbath, Can being among the most famous ones, though there are many more- managing to incorporate them into a cohesive sum. But it isn't only about the samples, the instrumentation is also great. When you have guys like Jack White making a guest appearance, you know it's something special. Rapping is likewise of the highest level, as all members are on the top of their game here and the chemistry between them is as good as ever, while the guests never fail to make an impression. The lyrics explore for the most part ever so timely and relevant socio-political themes ("They’d rather lead us to the grayest water poison deadly smog Mass un-blackening, it’s happening, you feel it y’all? Rather see we in a three-by-three structure with many bars Leave us where we are so they can play among the stars They taking off to Mars, got the space vessels overflowing What, you think they want us there? All us niggas not going Reputation ain’t glowing, reparations ain’t flowing If you find yourself stuck in a creek, you better start rowing Used to see the TV screen as the place to land my dream in And the car stereo where they would promote the show Optimistic little brother with a hope you know"). Dis Generation provides a change of subject and can be seen as passing the torch on to the next generation, ("Talk to Joey, Earl, Kendrick, and Cole, gatekeepers of flow They are extensions of instinctual soulIt's the highest in commodity grade And you could get it today"), which takes another meaning when you take into account that some members of the new generation do feature here (by the way, Kendrick's "Obama nation" devilishly sounding like "abomination" is the one line of the album I can't seem to forget, it's stuck in my head since day one). It goes without saying that a tribute to Phife Dawg couldn't be missing (Q-Tip "Malik, I would treat you like little brother that would give you fits Sometimes overbearing though I thought it was for your benefit Despite all the spats and shits cinematically documented The one thing I appreciate, you and I, we never pretended Rhymes we would write it out, hard times fight it out Gave grace face to face, made it right And now you riding out, out, out, out, damn", Jarobi "Never thought that I would be ever writing this song Hold friends tight, never know when those people are gone So, so beautiful, opined indisputable Heart of a largest lion trapped inside the little dude"). One complaint could be that the first side is so strong (tracks 1,2,3,5 are ridiculously good) that it would be almost impossible for the second side to catch up, but it comes with its own highlights -namely Lost Somebody and Conrad Tokyo - , so the difference is not that striking.

One could argue that this is A Tribe's best record. I'd still put The Low End Theory first but this is undoubtedly a powerful, emotional, and worthy final outing from one of the greatest rap groups of all time. Highlights for me are Whateva Will Be, Space Program, We The People..., and Dis Generation. There isn't a bad track on this album. The fact that this is ranked at number 9 for 2016 is crazy and really just goes to show what an amazing year 2016 was for music.

Some more commiserations due here, as this record was in part a tribute to member Phife Dawg who died this year. An even longer wait between albums than The Avalanches, but the payoff here is so much sweeter as ATCQ set the world to rights in their inimitable style.

Best track: We The People.... This should be shown to anyone who pretends they don’t see any musicality in hip-hop.

From a group that did not released any album in the last years, my expectations from this project were very low. Somehow, they have managed to come with a refreashing style to end the career of ATCQ. We the people is an incredible track that came at a very good moment in term of politics. RIP Phyfe

Who else can go away 18 years and come back with a classic?

This album turned me on to TCQ. Sadly, there won't be any new projects, but the old ones will never leave. It's amazing that Tribe came out with such a good album after going 18 years without putting one out. And their style ages like wine.

Highlights- We the People, Solid Wall of Sound, Black Spasmodic

First half is great, but the quality does deteriorate a little into the second half. Some excellent songs and tunes though.

Like a visit from an old friend - Q-Tip sounds so familiar, & Busta on so many tracks made me feel like a hip-hop fan from the 90s again. This album wasn't just for nostalgia, TCQ showed that they still have a few tricks up their sleeve.

An important album. The sun shines a little brighter when these guys have something to say, even if they did change their tone. Lots of fun, intelligent and enlightening.

Amazing samples and social commentary. It definitely takes a few listens to take in the complexity of this powerful piece of art.

Your feedback for We Got It From Here... Thank You 4 Your Service