You Want It Darker (album) by Leonard Cohen 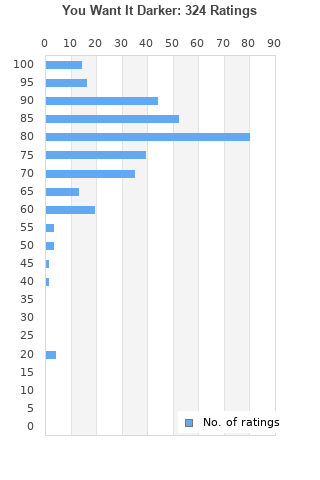 You Want It Darker is ranked 5th best out of 26 albums by Leonard Cohen on BestEverAlbums.com.

The best album by Leonard Cohen is Songs Of Leonard Cohen which is ranked number 162 in the list of all-time albums with a total rank score of 11,248. 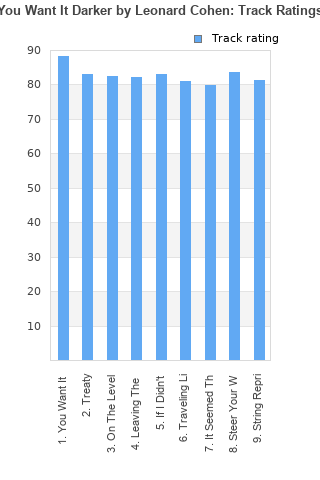 You Want It Darker rankings

You Want It Darker collection

You Want It Darker ratings

Rating metrics: Outliers can be removed when calculating a mean average to dampen the effects of ratings outside the normal distribution. This figure is provided as the trimmed mean. A high standard deviation can be legitimate, but can sometimes indicate 'gaming' is occurring. Consider a simplified example* of an item receiving ratings of 100, 50, & 0. The mean average rating would be 50. However, ratings of 55, 50 & 45 could also result in the same average. The second average might be more trusted because there is more consensus around a particular rating (a lower deviation).
(*In practice, some albums can have several thousand ratings)
This album is rated in the top 2% of albums on BestEverAlbums.com. This album has a mean average rating of 79.0/100. The trimmed mean (excluding outliers) is 79.7/100. The standard deviation for this album is 12.4.

You Want It Darker favourites

You Want It Darker comments

And so begins the sad part of the list. I can’t fathom what it’s like to know you’re dying, let alone muster up all your energy to make an album about it. Thankfully, Leonard Cohen is a million times the man I am, and so eloquent is his way that you can imagine hospices using this to prepare people to join the choir invisible.

Best track: You Want It Darker. His voice was just a thin smoke at this point, but you can feel so much soul in his words.

A masterpiece of our time!!!

Such a deep album from an artist who gave his last effort in delivering a masterpiece. We still miss you LC.

For now, I think it's his best. Might change through the years though

Hayden's right. You can hear throughout this album that he knew what was next. Powerful. HIs best since I'm Your Man, and a great way to let the curtain down on a brilliant life.

Cohen pulled a Bowie here with a great album released closely before his death. A very good album with some of his best work in years, but to be honest I thought he returned to form even before this one, since 2014's Popular Problems isn't far behind this one in terms of quality.
A lovely way to say goodbye, much more life affirming than Blackstar.

Gorgeous album. I especially love the way the albums ends with that very emotional version of Treaty. One of the best of 2016!

An incredible recording under any circumstance, but considering Leonard almost undoubtedly knew this would be his last and the health problems he endured, this is even more remarkable.

It is difficult to pick out any highlights as it all flows so beautifully but I have to mention Treaty, which I believe is possibly his best song since Tower Of Song or I'm Your Man, which is indeed going back quite a while. The title track here is also not far behind and Leaving The Table is another notable track, and this album completes a wonderful trilogy of albums that in turn completes Leonard Cohen's immaculate body of work.

A good record to close an incredible career. Hallelujah!

Your feedback for You Want It Darker