The Life Of Pablo (studio album) by Kanye West 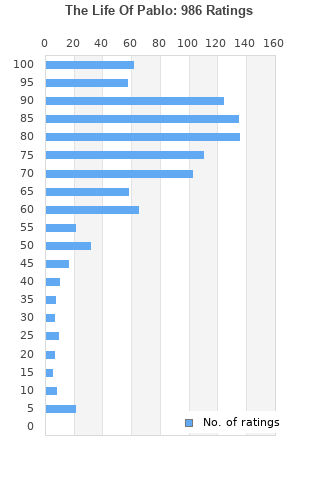 The Life Of Pablo is ranked 5th best out of 14 albums by Kanye West on BestEverAlbums.com.

The best album by Kanye West is My Beautiful Dark Twisted Fantasy which is ranked number 32 in the list of all-time albums with a total rank score of 31,097. 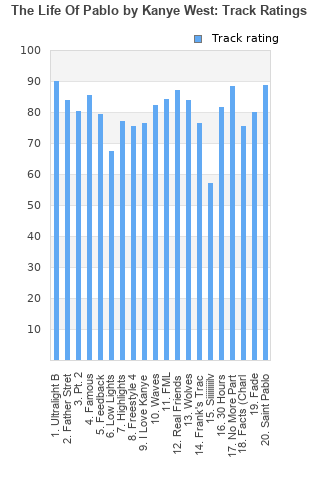 The Life Of Pablo rankings

The Life Of Pablo collection

The Life Of Pablo ratings

Rating metrics: Outliers can be removed when calculating a mean average to dampen the effects of ratings outside the normal distribution. This figure is provided as the trimmed mean. A high standard deviation can be legitimate, but can sometimes indicate 'gaming' is occurring. Consider a simplified example* of an item receiving ratings of 100, 50, & 0. The mean average rating would be 50. However, ratings of 55, 50 & 45 could also result in the same average. The second average might be more trusted because there is more consensus around a particular rating (a lower deviation).
(*In practice, some albums can have several thousand ratings)
This album is rated in the top 8% of all albums on BestEverAlbums.com. This album has a Bayesian average rating of 75.8/100, a mean average of 73.9/100, and a trimmed mean (excluding outliers) of 75.8/100. The standard deviation for this album is 19.8.

The Life Of Pablo favourites

The Life Of Pablo comments

A bit of a mess of a release but it really comes together in spells and you get some of Kanye's best ever music as a result of it. It sounds fresh and experimental and the use of samples is very effective. He keeps the sound changing the whole way through the album and you never really know what is coming up next which is a great experience for a record. The beats he creates are phenomenal and are so easy to bop your head along to them as he builds on top of them with the use of very intelligent samples and choruses. However, lyrically this album is a bit weaker than some of his other releases and it is a bloated release with it coming in at over the hour mark. This means there is quite a lot of filler in my opinion. Overall, this is Kanye's most experimental album and I can see why people keep getting drawn back to this album as there are so many great tracks.

This album is making me rethink all of Kanye's discography. It's soulful, experimental, and large. It's not perfect, obviously, but there's almost no duds on this thing. Have I been wrong about Mr. West?

The more I listen to this album, the more I enjoy it.
It instantly hooked me with Chance's verse on Ultralight Beam, then Father Stretch my Hands 1&2, and Famous. The 3 songs are one of the best starts to an album I've ever heard.

I still debate whether this is better than Dark Fantasy. Lyrically it's not as good, as others have pointed out. But in terms of sheer musical experimentation it might be. West finds a way to sample so many unique and different artists, that it actually leads one to seek out more music and listen to things they might not otherwise have.
At the same time, his beats and flow cause the songs to become stuck in your head.

It really is a great album, I might put it as Kanye's 2nd best for now.

It's Kanye's White Album, all over the place, takes some time to fully appreciate, but it only gets better and better.

This is one of those albums that'll get more credit the longer it's around.

Out of his more experimental albums Life Of Pablo is by far the best. It's got loads of those beat-less moments that are particularly fashionable in hiphop at the moment but Kanye pulls it off better than anyone.

All of these tracks compliment each other so well, I find it much more enjoyable to listen to the whole thing as an album rather than skipping between tracks, which probably why it hasn't had the credit it deserves. Not many people listen to whole albums these days.

The only weakness this record has is the lyricism is not amazing. Although I'd say everything post My Beautiful Twisted... has the same problem.

If your a production and album format fan this record is one of, if not the best of Kanye's work. The production and arrangements are superb, sounding brand new, cutting edge but soulful and human at the same time.

Your feedback for The Life Of Pablo