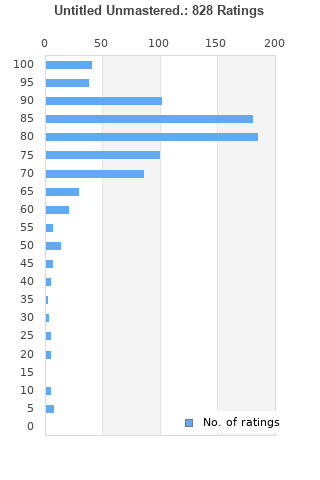 Untitled Unmastered. is ranked 5th best out of 8 albums by Kendrick Lamar on BestEverAlbums.com.

The best album by Kendrick Lamar is To Pimp A Butterfly which is ranked number 22 in the list of all-time albums with a total rank score of 40,496. 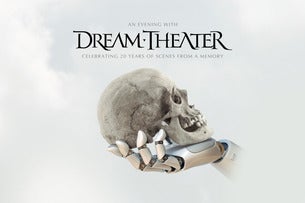 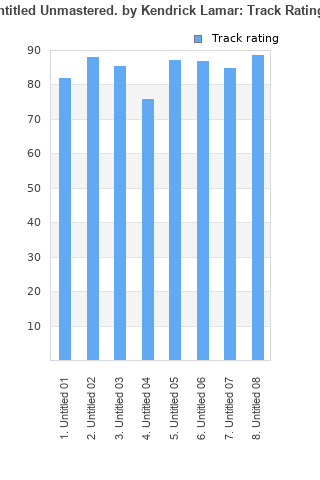 Rating metrics: Outliers can be removed when calculating a mean average to dampen the effects of ratings outside the normal distribution. This figure is provided as the trimmed mean. A high standard deviation can be legitimate, but can sometimes indicate 'gaming' is occurring. Consider a simplified example* of an item receiving ratings of 100, 50, & 0. The mean average rating would be 50. However, ratings of 55, 50 & 45 could also result in the same average. The second average might be more trusted because there is more consensus around a particular rating (a lower deviation).
(*In practice, some albums can have several thousand ratings)
This album is rated in the top 2% of all albums on BestEverAlbums.com. This album has a Bayesian average rating of 80.1/100, a mean average of 78.5/100, and a trimmed mean (excluding outliers) of 80.2/100. The standard deviation for this album is 15.0.

Clearly a B-sides of TPAB, but it worked very well, so why not more. It's easily forgotten though.

even though it's a collection of B-sides it's one of the best albums of the decade.

Some great ideas, it would have been a lot higher if more effort were put in this project.

This is an incredible album that's not given enough credit because it's a B-sides album. In my opinion this album holds up to other Kendrick releases like TPAB and Good Kid. It doesn't tell a complete and heartfelt story like those two albums do, but it IS an incredibly fun listen, that's great in its own right. Fav tracks 3,5,6,7,and 8

An amazing collection of b-sides. Untitled 02 and 07 are my favorite

A quality album of "outtakes" that is much better than most titled and mastered albums. Similar sound to TPAB with the jazz/funk influences and the Thundercat backing vocals. Strong points across most songs.

Given these songs are the b-sides to To Pimp A Butterfly, my favorite album of all time, it was not surprising that I found myself liking this EP. What was surprising however, was how different many of these songs were to the sound we heard on TPAB. Generally the songs have a more jazzy/trap vibe to them, which is a nice change and adds to his discography in a way which shows how great he is at making just about any kind of hip-hop song.

Even though this album does not benefit from the added effect a running theme can have, the concepts of many of the songs like untitled 3 about racial stereotypes and untitled 5 about societal institutionalisation driving him to nearly kill make it still thematically great.

Your feedback for Untitled Unmastered.