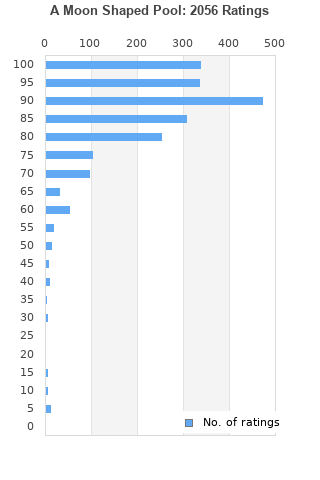 Radiohead A Moon Shaped Pool Special Deluxe Edition 2 LP, 2 CD
Condition: New
Time left: 9h 42m 40s
Ships to: Worldwide
$140.00
Go to store
Product prices and availability are accurate as of the date indicated and are subject to change. Any price and availability information displayed on the linked website at the time of purchase will apply to the purchase of this product.  See full search results on eBay

A Moon Shaped Pool is ranked 5th best out of 21 albums by Radiohead on BestEverAlbums.com.

The best album by Radiohead is OK Computer which is ranked number 1 in the list of all-time albums with a total rank score of 101,182. 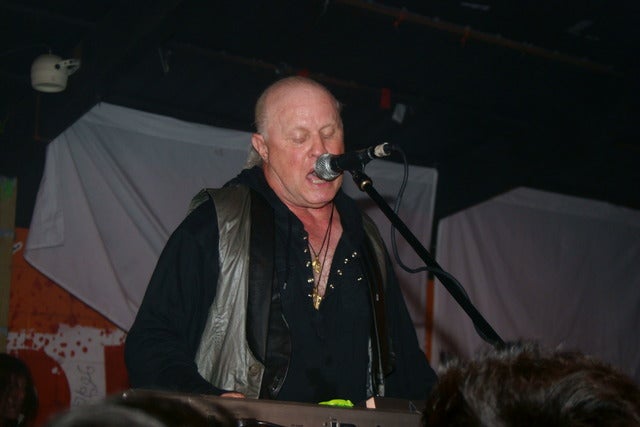 The Roundup: A Flock Of Seagulls And Men Without Hats
McGrath Amphitheatre, Cedar Rapids, United States. 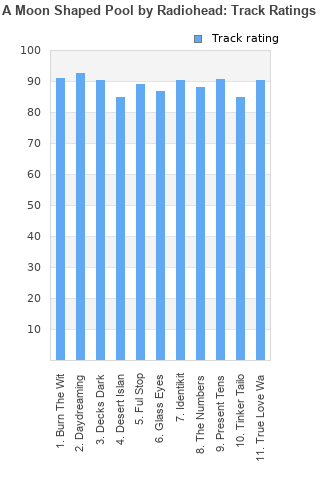 Rating metrics: Outliers can be removed when calculating a mean average to dampen the effects of ratings outside the normal distribution. This figure is provided as the trimmed mean. A high standard deviation can be legitimate, but can sometimes indicate 'gaming' is occurring. Consider a simplified example* of an item receiving ratings of 100, 50, & 0. The mean average rating would be 50. However, ratings of 55, 50 & 45 could also result in the same average. The second average might be more trusted because there is more consensus around a particular rating (a lower deviation).
(*In practice, some albums can have several thousand ratings)
This album is rated in the top 1% of all albums on BestEverAlbums.com. This album has a Bayesian average rating of 87.3/100, a mean average of 86.2/100, and a trimmed mean (excluding outliers) of 87.4/100. The standard deviation for this album is 13.6.

Probably the most heartbreaking Radiohead ever released. Not to mention they made lot of somber records, but this one hits differently due to number of events inspired this album. The orchestration is so amazing. The atmosphere is so well used.

All around great album. Not as banger-y as some other Radiohead albums, but the flow is perfect from start to finish.

Top 3 radiohead albums if not higher. These dudes definitely deserve to be considered as the best band ever. Way above everybody.

Radiohead is not slowing down at all

It's been more than two years since i wrote that and four years since this came out, and i could never be more right about an album. This album's impact has been coming in waves, and now it grew an ocean on me . Brilliant work

Took me almost 4 years and a couple dozen listens but I can safely say that, contrary to my initial review that the album is lazy and overrated, the album IS.. infact, a masterpiece.

Your feedback for A Moon Shaped Pool