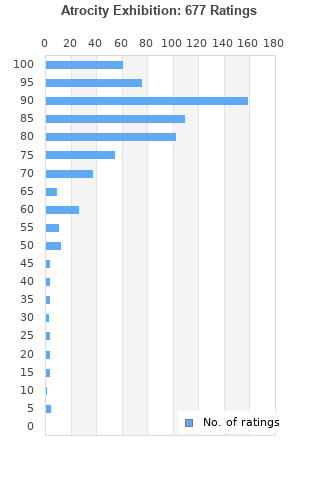 Atrocity Exhibition - Danny Brown Compact Disc Free Shipping!
Condition: Brand New
Time left: 5d 16h 56m 30s
Ships to: Worldwide
$20.73
Go to store
Product prices and availability are accurate as of the date indicated and are subject to change. Any price and availability information displayed on the linked website at the time of purchase will apply to the purchase of this product.  See full search results on eBay

Atrocity Exhibition is ranked as the best album by Danny Brown. 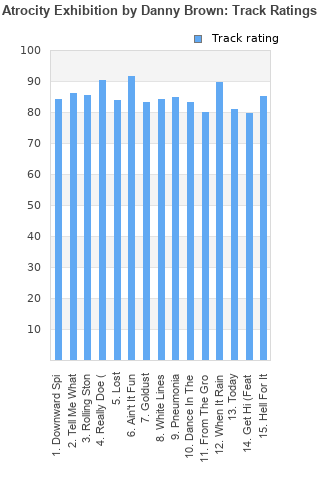 Rating metrics: Outliers can be removed when calculating a mean average to dampen the effects of ratings outside the normal distribution. This figure is provided as the trimmed mean. A high standard deviation can be legitimate, but can sometimes indicate 'gaming' is occurring. Consider a simplified example* of an item receiving ratings of 100, 50, & 0. The mean average rating would be 50. However, ratings of 55, 50 & 45 could also result in the same average. The second average might be more trusted because there is more consensus around a particular rating (a lower deviation).
(*In practice, some albums can have several thousand ratings)
This album is rated in the top 1% of all albums on BestEverAlbums.com. This album has a Bayesian average rating of 83.3/100, a mean average of 81.8/100, and a trimmed mean (excluding outliers) of 83.5/100. The standard deviation for this album is 15.5.

Right off the bat you get the main idea, it's gonna be a trip down some of the darkest paths of the human experience, namely drugs. ("I'm sweating like I’m in a rave Been in this room for 3 days Think I’m hearing voices Paranoid and think I’m seeing ghost-es, oh shit Phone keep ringing but I cut that shit off Only time I use it when I tell the dealer drop it off"). The frenzy of his delivery -matched by the production that likewise follows the same direction - showcases how it can make you totally lose control. There is the exception of Tell Me What I Don't Know, which comes with a different delivery, maybe he's getting numb and he's lost his energy - again due to the same reason. One has to mention the guests when talking about this album, especially Really Doe. It comes with its own all star lineup, though it has to be said that Kendrick comes dangerously close to stealing the show ("The rev undid, the all day madness Got it off the wipe it off, the evidence, the blood on mattress Big power, big stages My zoo cannot fit the cages This booth is not used to fakin'") and Earl is not half bad either ("Good, hood I wish you motherfuckin' would Listen, wish a motherfucker would, Brown I had to put my foot down It's like I'm popping a clutch Your hate palpable, your jaw full of dust You gon' keep talkin' or are we lockin' it up? And I'm the type of nigga it ain't never been an honor to judge You a mouse that the falcon picked up So disrespect will get you checked like the top of the month"). 15 tracks in about 45 minutes may seem like too many, but I guess that's the point, they go by too fast and they leave you with a hazy recollection of what happened, just like a hangover.

Very good work from Danny, the best of him so far

This album is incredible and a true testament to Danny Brown's ability to evolve and experiment. This is a top three rap/hip-hop album of the decade.

Atrocity Exhibition is frantic drug addicted hip-hop post-punk. Brown's speed and nasally high tone portray a violent mania that threatens to consume him. The instrumentals are filled with Joy Divisionesque bass lines and distortion. The A side is stronger than the B however with the latter weakening in theme and lyricism. Still an impressive work.

I have to admit I didn’t know too much of Danny Brown’s work before this album. Now I’m wondering why. I can’t even describe what I like about Atrocity Exhibition, it’s just so busy and loud and colourful. I haven’t felt this level of confused exhilaration since I first listened to Spank Rock.

Best track: Ain’t It Funny. What the hell is going on here?

Although i really like what's going on instrumentally here I just can't get past his flow and voice. Maybe someday in a diferent mindset i will look back at this and see it's greatness but for now this is not my thing. I still want to see what Danny Brown Will bring us in the future.

This is a case of making any psychiatrist curious. Danny Brown is one of my favorite hip-hop artists of the decade, even of all time. "XXX" is arguably the best rap mixtape of the decade. "Atrocity Exhibition" is Danny Brown's album that best probes the darkest recesses of his mind severely eaten away by acidic substances. His horrifying universe - in the sense that we perceive the projections of his macabre imagination - is revealed to us and allows us to understand as never the thoughts that inhabit it, and sometimes haunt it. This album would not be so demonstrative and paranormal without the collaboration of Paul White, who plays a significant role behind the camera. Many listeners will end up on the floor on a creaky floor, obsessed with flashes of debauchery and repressed memories. Danny Brown administers with us "Atrocity Exhibition" the right dose of this music that proves to be terribly addictive and strong, very strong.

Your feedback for Atrocity Exhibition