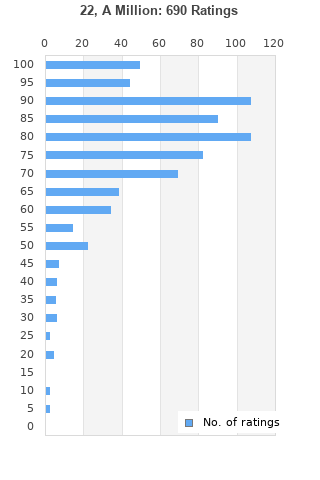 22, A Million is ranked 3rd best out of 6 albums by Bon Iver on BestEverAlbums.com.

The best album by Bon Iver is For Emma, Forever Ago which is ranked number 96 in the list of all-time albums with a total rank score of 15,281. 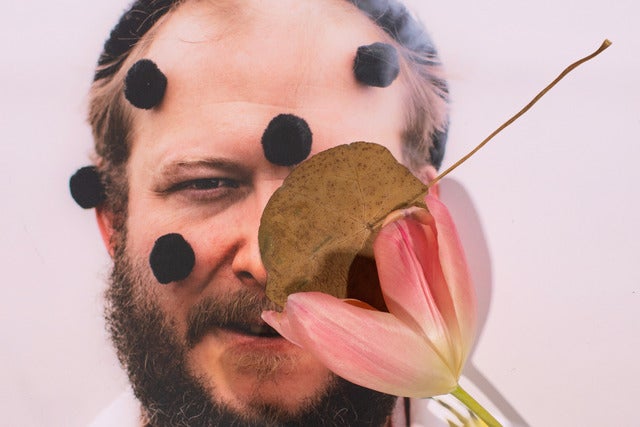 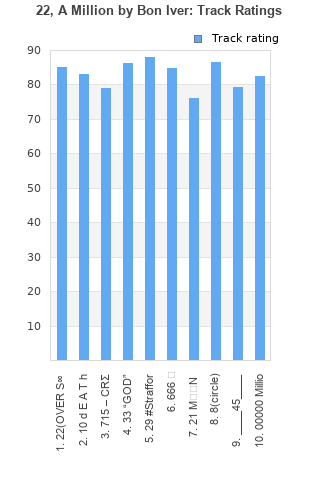 Rating metrics: Outliers can be removed when calculating a mean average to dampen the effects of ratings outside the normal distribution. This figure is provided as the trimmed mean. A high standard deviation can be legitimate, but can sometimes indicate 'gaming' is occurring. Consider a simplified example* of an item receiving ratings of 100, 50, & 0. The mean average rating would be 50. However, ratings of 55, 50 & 45 could also result in the same average. The second average might be more trusted because there is more consensus around a particular rating (a lower deviation).
(*In practice, some albums can have several thousand ratings)
This album is rated in the top 3% of all albums on BestEverAlbums.com. This album has a Bayesian average rating of 78.3/100, a mean average of 77.4/100, and a trimmed mean (excluding outliers) of 78.3/100. The standard deviation for this album is 16.2.

Loved all four Bon Iver album, this one is not different. Loved Creeks and 666 the most.

For Emma, Forever Ago was sublime. This is a million miles away from that classic folk album - but this is an amazing album. I took to it right away - I saw a comment below by JulienR saying take away the gimmicks and it is a folk album and I can buy into that. So many highs and no lows below Good delivered

2nd best Bon Iver. Its an album that will be overlooked by many for its ambitiously experimental sound, nearly too ambitious. You can hear a lot of Kanye here. But he doenst over extend himself on the experminenation, he nails it. This album is nearly perfect. Once you start seeing through some of the production gimmicks you realize how great these songs really are. Even GR33ks, a song with no instrumentation besides Justin's voice over auto-tune, manages to feel really impactful. 9.5/10 record for me

I know he had to take another turn (because he did). Done with what he had done so very good before. A repeat would have been 'tragic'. He has my full attention. But I simply don't like the new, in this album. Some day again, next year, or in ten years he will make something that knocks me again. I feel sure of it. If not, he still has made two small miracles of albums.

Listen to Lambchop. He still tops Bon Iver, and is in the same weight-class, or genre...

Great album, I wish the single version that came out as the single for 22 over soon was on the album.

This is a great album. Unlike anything I've heard before and definitely unlike any Bon Iver prior to it.

This album goes in a more interesting direction than previous works. While some of their earlier work is great, this takes the cake, if you ask me.

There is lot of emotion and creativity on this record. Don't even know what he's saying half the time, but I guess it really doesn't matter. The music finds a way of getting through.

First off, I'd like to point out I wrote that previous comment before I learned that Vernon and Kanye collaborated some on MBDTF, so props to me I guess. Secondly, this album has grown on me a lot. I still feel the way I did earlier about the albums peaks, but I'm beginning to see some of the more subtle beauty in alot of these tracks.

Your feedback for 22, A Million