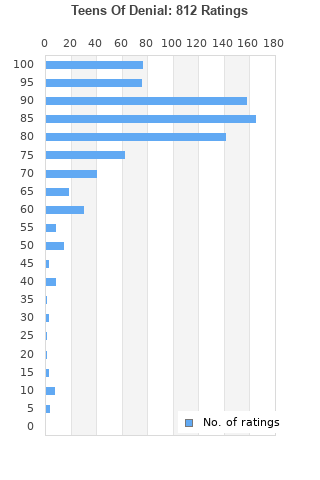 Teens Of Denial is ranked as the best album by Car Seat Headrest. 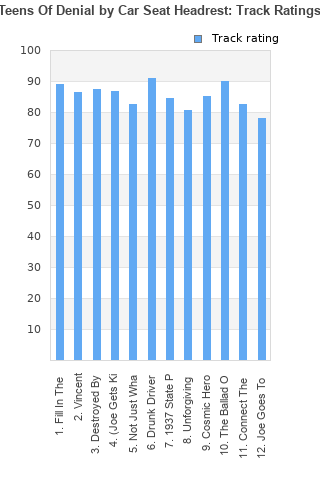 The Ballad Of The Costa Concordia
Rating: 90 (232 votes)Comments:

Rating metrics: Outliers can be removed when calculating a mean average to dampen the effects of ratings outside the normal distribution. This figure is provided as the trimmed mean. A high standard deviation can be legitimate, but can sometimes indicate 'gaming' is occurring. Consider a simplified example* of an item receiving ratings of 100, 50, & 0. The mean average rating would be 50. However, ratings of 55, 50 & 45 could also result in the same average. The second average might be more trusted because there is more consensus around a particular rating (a lower deviation).
(*In practice, some albums can have several thousand ratings)
This album is rated in the top 1% of all albums on BestEverAlbums.com. This album has a Bayesian average rating of 83.1/100, a mean average of 81.8/100, and a trimmed mean (excluding outliers) of 83.2/100. The standard deviation for this album is 15.5.

Car Seat Headrest serve as a reminder of how rock can still be interesting today. My only complaints might be that the songs like "Fill in the Blank" are even better fleshed out as a 7 piece, and there are moments like on "Vincent" where the guitar just goes back and forth between the same couple of chords excessively. It's not "bad", but it could have been more interesting. I'd love for the soloing in some of the live performances to be present on the album version and that would have really made "Vincent" hit much better. Unforgiving Girl and Cosmic Hero, while good feel like they could have been cut shorter. I don't feel like every track has the staying power like on "Twin Fantasy", but for the most part it's packed with very strong material, even the "duds" are great tracks if not compared to the rest.

Will uses his creativity to paint a vivid image of youth that really brings me back and makes me remember that time in my life.

That opening track's chorus gave me Alkaline Trio vibes. Throwback and a half. Good stuff on here. Lyrics are a bit angsty as usual but I dig the sound. One of the better albums of the 2010s.

Teens Of Denial is passionate album about not knowing what the hell to do in your college years. Will Toledo comes off as a clever song writer with his digs at his self and the situations around him. The songs can switch into different styles and really sell the feelings. There album has some flaws like tracks that go on too long and Toledo's limited vocal range. The main problem however is a lot of this album sounds like a collage of other artists. One minute you are listening to pixies then its pavement but never really Car Seat headrest. I do like this album but I feel like it needs to grown into it's own.

Teens of Denial is the album that semented CSH as one of the most those promising bands we all love to search in every corner of the internet.
I remember first listening to this last year and I had my brains blown out, I didn't think stuff like this could exist nowadays, 10+ minutes rock tracks? Where we are? The seventies?
Jokes aside, CSH brought back that sentiment that has been with rock music since it's birth, and that's a worthy achievement, and I do love them, despite the Strokes feel they carry.
Teens of Denial has some great tracks, that really stunned me, like Drunk Drivers and Drugs with friends, but overall is not that cohesive of an album, and is no way near as good as per say a "Blonde" or a "A Moon Shaped Pool", It has too many slip ups, It is a bit dragged out and the tracks that aren't so great, they, well, aren't so great.

Your feedback for Teens Of Denial