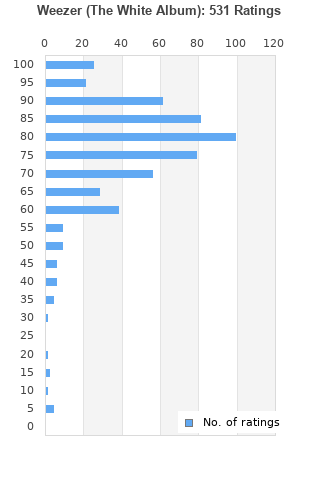 Weezer (The White Album) is ranked 3rd best out of 25 albums by Weezer on BestEverAlbums.com.

The best album by Weezer is Weezer (The Blue Album) which is ranked number 74 in the list of all-time albums with a total rank score of 18,942. 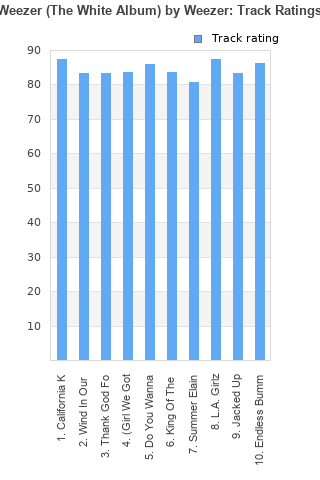 Rating metrics: Outliers can be removed when calculating a mean average to dampen the effects of ratings outside the normal distribution. This figure is provided as the trimmed mean. A high standard deviation can be legitimate, but can sometimes indicate 'gaming' is occurring. Consider a simplified example* of an item receiving ratings of 100, 50, & 0. The mean average rating would be 50. However, ratings of 55, 50 & 45 could also result in the same average. The second average might be more trusted because there is more consensus around a particular rating (a lower deviation).
(*In practice, some albums can have several thousand ratings)
This album is rated in the top 4% of all albums on BestEverAlbums.com. This album has a Bayesian average rating of 77.3/100, a mean average of 76.3/100, and a trimmed mean (excluding outliers) of 77.3/100. The standard deviation for this album is 15.0.

Aging like a fine wine. I hold a lot of cherished memories from the time this album was released so I'm a little biased, but I really think this rivals Blue and Pinkerton. The songwriting is so driven, focused, and to the point where you can tell Rivers had a point to prove, and that gives the album sublime focus and flow; moving from point to point in a flash with none of the extravagant, left turn frills that Weezer had been providing in the years up until their prior outing.

Joyous, positive, and filled to the brim with good vibrations; I cannot speak enough about how much I ADORE this record.

This has aged very well. In my opinion, this will go down as another classic from Weezer

Weezer's White Album might very well be their best one ever, at least since Blue. It expertly anchors its sound and lyrics in days far gone, while still sounding inherently modern and polished. The lyrics centre around life in L.A., making all songs fit nicely within one and the same continuity. I love every single song on the album and there isn't any single song that is bad or forgettable.
This is the ultimate feel-good summer album, with plenty of high tempo rock songs to keep the listener entertained. It's consistent, filled with energy, happiness and nostalgia. White was one of the first albums I listened to when I started listening to alternative rock and it's still one of the overall best albums to be released within the genre. It's nothing deep or groundbreaking within the rock genre, but it's inherently catchy.

Soooo damn good. It only gets better with age, a truly underrated gem

The thing I don't get about this album, is how it took so long for me to come around to it, I didn't realize how freaking great it was until my 4th or 5th listen. For some reason the songs just weren't memorable for me, but now I sing the songs at the top of my lungs every time I listen

Takes a couple listens, but they pulled this one off pretty nicely, although I really can't imagine myself listening to this any time of the year other than summer.

Rivers surely came back to fit, fantastic record, might put it next to pinkerton for me, with every listen it gets better and better.

Great shit by Weezer, their best hands down since Pinkerton.

The most pleasantly surprising record of the year. Never have I expected these guys to produce an album so sweet and full of great powerful choruses. They may be older now but boy do they feel young and fresh. So much fun in this album.

Your feedback for Weezer (The White Album)