Permission To Land (studio album) by The Darkness 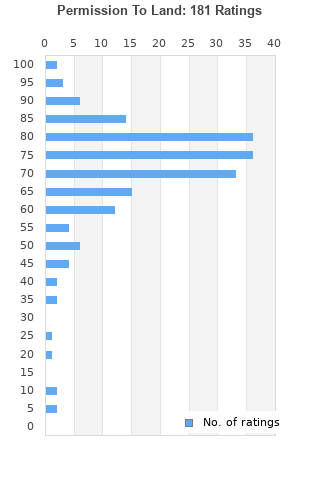 The Darkness - Permission to Land (Parental Advisory, 2004)
Condition: Very Good
Time left: 1h 20m 39s
Ships to: Worldwide
£1.99
Go to store
Product prices and availability are accurate as of the date indicated and are subject to change. Any price and availability information displayed on the linked website at the time of purchase will apply to the purchase of this product.  See full search results on eBay

Permission To Land is ranked as the best album by The Darkness. 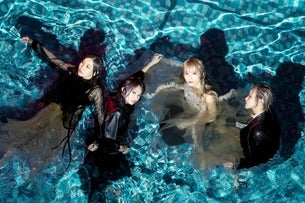 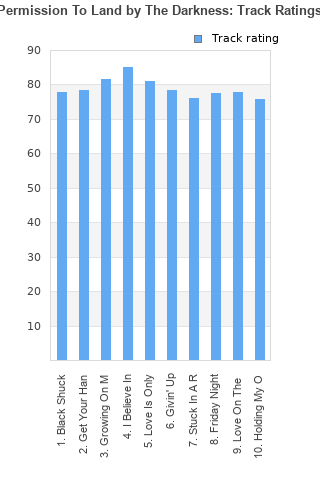 I Believe In A Thing Called Love
Rating: 85 (55 votes)Comments:

Rating metrics: Outliers can be removed when calculating a mean average to dampen the effects of ratings outside the normal distribution. This figure is provided as the trimmed mean. A high standard deviation can be legitimate, but can sometimes indicate 'gaming' is occurring. Consider a simplified example* of an item receiving ratings of 100, 50, & 0. The mean average rating would be 50. However, ratings of 55, 50 & 45 could also result in the same average. The second average might be more trusted because there is more consensus around a particular rating (a lower deviation).
(*In practice, some albums can have several thousand ratings)
This album has a Bayesian average rating of 71.9/100, a mean average of 69.9/100, and a trimmed mean (excluding outliers) of 71.8/100. The standard deviation for this album is 16.2.

I wasn't quite sure how to take this disc. Was it supposed to be a parody of hard rocking albums of the 70s, a jibe at glam bands, an attempt to update heavy metal and bring it into the 21st century? I couldn't tell if the band were sincere or not or had all their tongues firmly in their cheeks. I listened repeatedly to the disc and still haven't made up my mind. The lead singer, Justin Hawkins, lapses into an ear-splitting falsetto on nearly every song - it was if he thought he was in Garth's car head-banging to "Bohemian Rhapsody" in Wayne's World. His brother, Dan Hawkins, does have some guitar skill which he shows off occasionally, but far too infrequently. When I finish listening to this I usually have a migraine - yet there is something catchy about it.

One of the best rock debut albums in 2000's. After this record they never reached again this level in studio. In 2003 this album blew my mind when MTV was dominated by annoying pop music. Still it's a blast to hear it more than 10 years later. I agree is nothing spectacular but it sure is a solid album

Only just good hard rock/glam metal album. Best 10 songs average is 77,7/100 and the album can get good 80/100. Sound is very good - but vocals take MUCH getting used to. What a strong start of "Black shuck", I turned the radio loud and then --- this annoying falsetto. Don't know if I'm adapting to this sometime right. The songs with less of this wailing are quite good. So best songs are "I believe in a thing called love" and "Love is only a feeling" both 85/100, followed by "Friday night" 80/100. All other songs average or below.

Can't say this sounds great in reterospect. Hasn't aged well - sounds more campy and annoying than it did in 2003.

Will never stop loving this album, despite it's cheesiness and goofs. Hell, the cheesiness is why I love this album so much. Perfect fun time album.

Loved this when it first came out, but listened to it again recently and although there are some decent songs on it, I think the novelty of it has long worn off and found myself skipping some of the tracks.

I like Growing On Me but can't understand the fuss made about this band at all!

Dude has an incredible voice and the album is a lot better than I expected. A little cheesy but it is an interesting/quirky take on classic hard rock. I like it.

Your feedback for Permission To Land