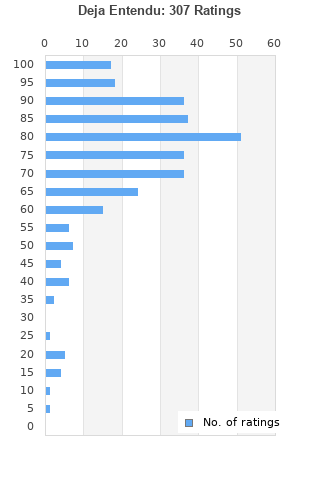 Deja Entendu is ranked 2nd best out of 7 albums by Brand New on BestEverAlbums.com.

The best album by Brand New is The Devil And God Are Raging Inside Me which is ranked number 369 in the list of all-time albums with a total rank score of 5,155. 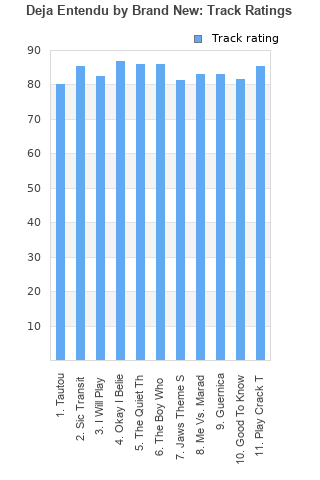 The Quiet Things That No One Ever Knows
Rating: 86 (85 votes)Comments:

The Boy Who Blocked His Own Shot
Rating: 86 (78 votes)Comments:

Rating metrics: Outliers can be removed when calculating a mean average to dampen the effects of ratings outside the normal distribution. This figure is provided as the trimmed mean. A high standard deviation can be legitimate, but can sometimes indicate 'gaming' is occurring. Consider a simplified example* of an item receiving ratings of 100, 50, & 0. The mean average rating would be 50. However, ratings of 55, 50 & 45 could also result in the same average. The second average might be more trusted because there is more consensus around a particular rating (a lower deviation).
(*In practice, some albums can have several thousand ratings)
This album is rated in the top 5% of all albums on BestEverAlbums.com. This album has a Bayesian average rating of 76.7/100, a mean average of 74.6/100, and a trimmed mean (excluding outliers) of 76.9/100. The standard deviation for this album is 18.0.

This is a great early album from this group and I thoroughly enjoyed it from beginning to end. Every song has something different and fun on it and the album has several stand out tracks that are among some of the groups best. I love the instrumentation and the vocal performance on the record as well and the lyrics add a lot to explore. Overall, an album that needs to be heard.

Reading all the other reviews I kind of stand out like a sore thumb, because I don't appreciate the "Greatness" here. Rudimentary melodies, trite lyrics, shambled together "statements" - all add up to not my cup of tea.

As someone who is not really into emo music, I liked Deja Entenou significantly more than the Devil and God. Still not something I'd generally listen to. I liked the melodies and build up of every song but the emo payoff is not something I vibe to. There are rare moments when I'm in an emo mood so next time I am, I'll throw this album on for sure.

Not a single low moment on the album. Good as hell.

The most astonishing about this album is how I notice new things every time i listen to it, even after 13 years of listening to it. Incredible depth both musically and lyrically, both building on YFW and paving the way for TDAG. Absolutely brilliant album in every way.

I have listened to this album countless times, and back when It came out it was the only record I had with me and my walkman, so I would listen to is over and over again. Although sic transit Gloria is a great song, the lyrics or vocal performance on the other tracks isn't overly impressive. Its a good record, but does not deserve to be ranked as high as it is.

It makes me sad to know people in my school who say they enjoy "emo" and "pop punk" and they don't know anything of this album or band.
Last week, I showed this to a friend and he was pleasantly surprised, he said he was looking for music like this for years.
In my personal opinion, this the greatest pop punk album ever made.
Best tracks: Play Crack The Sky, i believe you .. but my tommy gun don't, Guernica, Elvis vs. Maradona vs. me

I don't know how I memorized this whole album in a few weeks. But I did. Mind-blowingly influential, brilliant lyricism that will stick with me my whole life. Easily the greatest emo record of all time. I would kiss Jesse Lacey's feet.

Your feedback for Deja Entendu