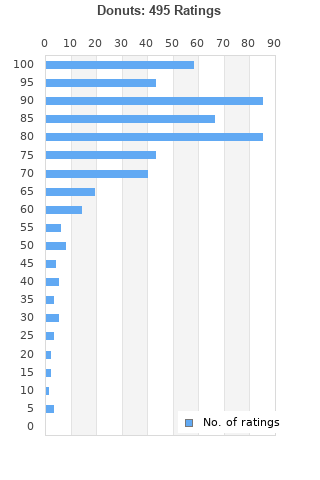 Donuts is ranked as the best album by J Dilla. 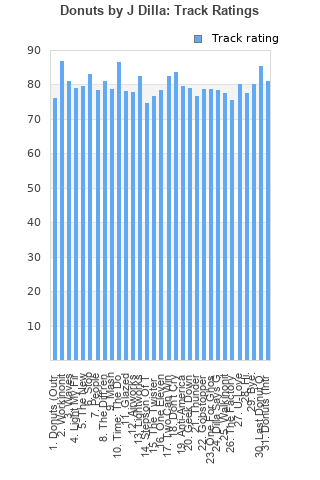 Rating metrics: Outliers can be removed when calculating a mean average to dampen the effects of ratings outside the normal distribution. This figure is provided as the trimmed mean. A high standard deviation can be legitimate, but can sometimes indicate 'gaming' is occurring. Consider a simplified example* of an item receiving ratings of 100, 50, & 0. The mean average rating would be 50. However, ratings of 55, 50 & 45 could also result in the same average. The second average might be more trusted because there is more consensus around a particular rating (a lower deviation).
(*In practice, some albums can have several thousand ratings)
This album is rated in the top 1% of all albums on BestEverAlbums.com. This album has a Bayesian average rating of 81.4/100, a mean average of 80.2/100, and a trimmed mean (excluding outliers) of 81.6/100. The standard deviation for this album is 17.0.

Great instrumental album. There is genius and death in those beats.

Happy 15th Anniversary To This Album!

This is cool in and of itself, but it's more resonant when you know something about the context in which it was made.

Donuts is an incredibly sad last effort by J Dilla. This album is amazing.

On the 7th of February 2006, after around 4 months of label disputes J Dilla's 'Donuts' was finally released.
3 days later he was dead.

Donuts is so much more than just a beat tape, it's the final swan-song of a dying man who felt that in his final moments he had to push himself into making something worth being remembered by. 29 out of the 31 tracks were recorded from a hospital bed in Cedars-Sinai Medical Center with nothing but an Boss SP-303 small 45 record player his friends had brought him as a gift, Dilla was undergoing treatment for TPP and lupus, records that his mother would bring him were used as the sources of the sampling for the album. It's a common complaint that all of the songs here are too short and fleeting, but to me it's perfect. It's sort of hauntingly symbolic of how life itself is too short and fleeting, but personal meaning aside, every song here is so lush and beautiful, tiny little details are spread across all 31 tracks, it's impossible to listen to them and not hear something new. I wish they could go on forever. I really do.

I am not worthy of listening to this. I can't even believe this thing exists. I listen to this and I think about how terrifying death is, how scared Dilla must have been. there are no words to describe how breathtaking this music is.

One of the records that got me into listening to hip hop music in general.

good album to listen to while studying.

The essential beatmaking record. It's all there for you.

Your feedback for Donuts