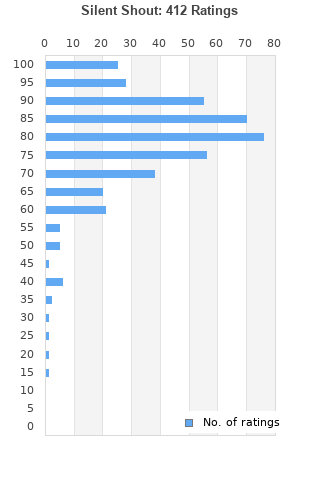 Silent Shout is ranked as the best album by The Knife. 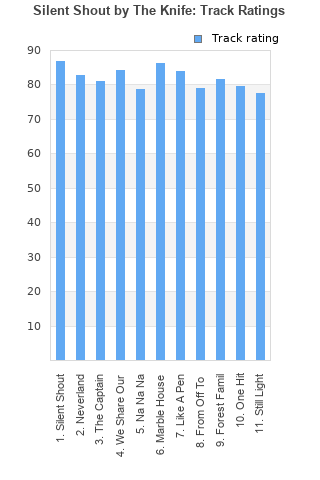 Rating metrics: Outliers can be removed when calculating a mean average to dampen the effects of ratings outside the normal distribution. This figure is provided as the trimmed mean. A high standard deviation can be legitimate, but can sometimes indicate 'gaming' is occurring. Consider a simplified example* of an item receiving ratings of 100, 50, & 0. The mean average rating would be 50. However, ratings of 55, 50 & 45 could also result in the same average. The second average might be more trusted because there is more consensus around a particular rating (a lower deviation).
(*In practice, some albums can have several thousand ratings)
This album is rated in the top 2% of all albums on BestEverAlbums.com. This album has a Bayesian average rating of 79.6/100, a mean average of 78.9/100, and a trimmed mean (excluding outliers) of 79.8/100. The standard deviation for this album is 14.0.

The lead vocal is so unique and really adds that edge to some of the songs which makes them a complete package. The album starts off so well with the title track which is a 5 minute epic and is definitely the peak of the record. Technically everything is downhill from there but it still remains at a high level of quality with several great songs coming later in the album. This includes tracks like We Share Our Mother's Health and Marble house. Furthermore, the atmosphere is intelligently crafted with it sounding so thick and dense making for a unique experience. This is maintained for the full run time and it really benefits the weaker tracks as you don't get sucked out the album if your entangled in the atmosphere. However, a few elongated cuts and weaker songs keep the release from being elite. Most of the longer songs take too long to really get going and the last four tracks are pretty poor. If they were removed the album would be far superior. Overall, an enjoyable electronic release that is carried by its unique atmosphere and vocals.

Wow. The atmosphere on this one is DENSE.

Really cool electronic band! Her vocals are some of the coolest and most unique female vocals out there.

Remarkable album. This is The Knife at their peak. Wonderfully weird and eerie yet danceable. Love the pitch shifting and harmonized vocals.

I reckon it's the lyricism which sets this apart from every other electropop/synthpop LP out there this century, rarely ever does the genre inhabit lyrics with this much sensitivity and depth. Not that "Silent Shout" doesn't have great production.. it's ambitious, sounds epic but most of all pairs together symbiotically with Dreijer's vocals which excellently add another dimension of unease. Pretty much the pinnacle of the genre in its decade.

Some songs bloom into intense nightmares and others are simplify strange whimpers, poor production choices holds this album back.

Dark. Strange. Not a bad track here. Shaking the Habitual had some truly incredible moments but this is their most consistent.

Your feedback for Silent Shout