The Black Parade (studio album) by My Chemical Romance 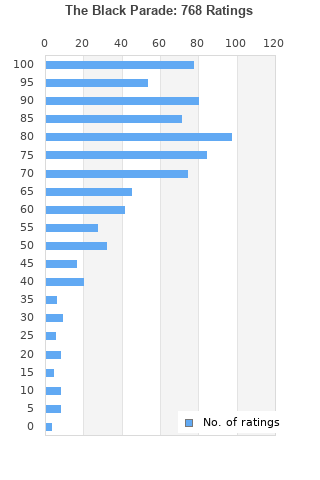 The Black Parade is ranked as the best album by My Chemical Romance. 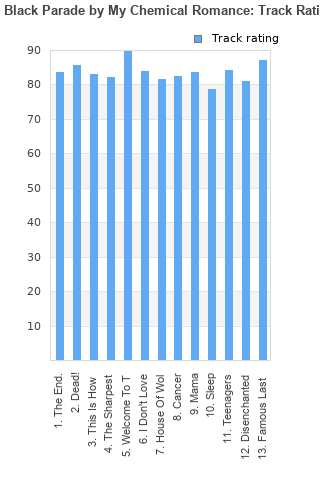 Rating metrics: Outliers can be removed when calculating a mean average to dampen the effects of ratings outside the normal distribution. This figure is provided as the trimmed mean. A high standard deviation can be legitimate, but can sometimes indicate 'gaming' is occurring. Consider a simplified example* of an item receiving ratings of 100, 50, & 0. The mean average rating would be 50. However, ratings of 55, 50 & 45 could also result in the same average. The second average might be more trusted because there is more consensus around a particular rating (a lower deviation).
(*In practice, some albums can have several thousand ratings)
This album has a Bayesian average rating of 73.7/100, a mean average of 72.7/100, and a trimmed mean (excluding outliers) of 73.7/100. The standard deviation for this album is 21.6.

A good album that discusses interesting topics and have some very catchy choruses. It is really consistent in style and song structure making it feel very compact and together. There are no real bad songs either and every song has something that can engage the listener. The vocal is a personal highlight on this album for me as well. The concept is brilliant and dark and is very interesting to explore. However, the album can be a little slow and by the end you do crave something different to the pop punk styling. Overall, a great album with some thoroughly enjoyable tracks.

This is one of those albums that’s so good, so defining it completely defines the artist forever to the point they can never escape its shadow and is forever beholden to its presence with any releases post simply pale imitations of the preceding master work. Green Day is a similar example with ‘American Idiot’. Hell MCR even released a live album in 2008 entitled ‘The Black Parade Is Dead’ - nice try boys but it didn’t work, unfortunately. MCR’s legacy has been set in stone

Simply put ‘WTTBP’ is and will always remain their best work. Better to have 1 masterpiece than a career built on mediocrity , am I right or am I am I right ?

One of the best albums of all time, literally flawless, no other MCR album even comes close

Huge throwback. I can still enjoy this sometimes. They're hated for their "emo" sound yet the band themselves rejected that label. This record is a rock opera about death and they did it fairly well.

The band's strongest and most consistent performance. Maybe it's because this is the album that introduced me to music, but I consider it one of the best of all time.
Conceptually, lyrically, musically this album succeeds in everything it attempts.
My favourite tracks are: Dead! Welcome to the Black Parade, and Mama
There are no bad tracks.

Seems about right for this site. I just hope one day the album average score does go up higher than it is now, but I know this site isn't very fond of pop punk. Either way, this dissonance is odd.

EDIT: Perhaps I should discuss my feelings about this album as a whole; make it a review. Out of the albums I listened to regularly in high school, this one holds up for me the most - even above American Idiot and Demon Days. This album has everything you could want and more: a strong concept, kickass vocals, memorable melodies, and captivating lyrics. My only complaint is the song Teenagers, while very good in its own right, doesn't have much to do with the story of the album. Perhaps it serves as a bit of a break from the anguish of the prior songs, but it is my least favorite song of the album because of this very reason. Overall, I find this album to be an experience you'll never forget, and I assure you, no matter your taste, chances are, if you like rock music, you'll like this album. You don't have to be emo or in any of the scene communities to enjoy it or admit to enjoying it.

Your feedback for The Black Parade