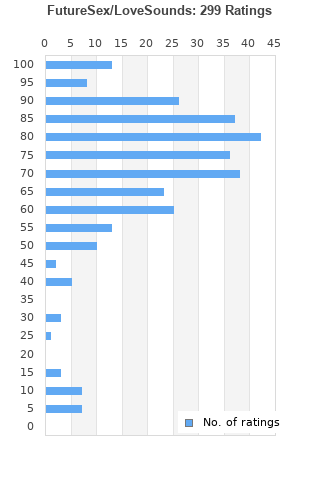 Justin Timberlake - FutureSex/LoveSounds (Parental Advisory, 2006)
Condition: Good
Time left: 12h 33m 31s
Ships to: Worldwide
£1.99
Go to store
Product prices and availability are accurate as of the date indicated and are subject to change. Any price and availability information displayed on the linked website at the time of purchase will apply to the purchase of this product.  See full search results on eBay

FutureSex/LoveSounds is ranked as the best album by Justin Timberlake. 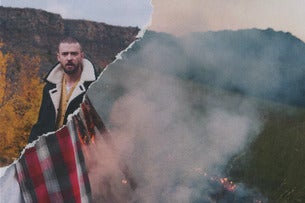 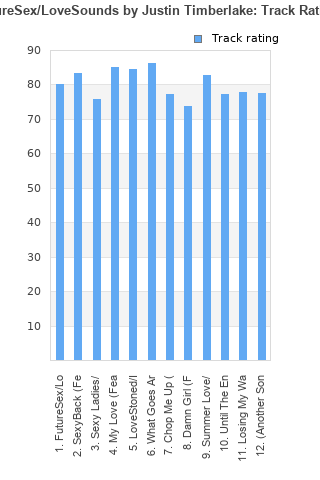 Rating metrics: Outliers can be removed when calculating a mean average to dampen the effects of ratings outside the normal distribution. This figure is provided as the trimmed mean. A high standard deviation can be legitimate, but can sometimes indicate 'gaming' is occurring. Consider a simplified example* of an item receiving ratings of 100, 50, & 0. The mean average rating would be 50. However, ratings of 55, 50 & 45 could also result in the same average. The second average might be more trusted because there is more consensus around a particular rating (a lower deviation).
(*In practice, some albums can have several thousand ratings)
This album has a mean average rating of 69.0/100. The trimmed mean (excluding outliers) is 71.2/100. The standard deviation for this album is 21.2.

One of the most underrated albums on this site.
A true timeless pop masterpiece.

Favorite tracks:
1)Lovestoned
2)What goes around
3)Summer Love/Set the Mood

I almost don’t want to give it a high rating, because it might change the 69/100 rating.
This is the type of pop album that makes rock purists say “I want to hate this, but it is just so good”. If you can do that, you’ve made a fucking stellar album.

This is pretty good. Lyrically, it's a mess, but for a 70-minute pop album, there's so much to love here. Fitting that the only bad song on the record is "Losing My Way."

A modern pop/dance record no fillers, JT has a great voice he can sing and these 12 songs demonstrate a more mature RnB influence. The first 6 tracks are absolutely brilliant it does dip a little in the middle but Summer Love & Till the End Of Time pick it up again. Great experimental sounds and a few songs that are as their titles imply 2 songs mixed into one. A great album one of the best albums released in the past 15 years.

Not ashamed to say this is a damn good pop album.

I hate to say this, but this is like my generations Thriller album or something... I don't care what genre you are into... this has some FANTASTIC tracks. Pop's finest in a while before and after. Missing the bonus track Pose with Snoop.

Granted had you asked me if this was a good album when I was in high school, my narrow minded self would be... well it's not "real" music, so no. But I'm so glad I grew up and can appreciate something good no matter what aesthetic is being used.

This is great. Definitely underrated on this site.

One of the best pop records to come out in the past 20 years. Very surprised it is not higher in the rankings. This album will be looked back on as a classic.

I'm slightly disgusted this album is out of the top 1000 and has a 69 bag rating. It's an awesome album people! Just shut up and listen!!!

The whole thing ended well. Almost as if he were apologizing to me for listening! Oh...NO NO! I can't be that harsh! The song had merits and there were some on this. The future. I'm not sure how like this it will be. Not a lot of topics I liked and not presented in how they will appeal to me. I loved the strings on 'What Come Around', 'Sexyback' had a fun nostalgia and the final two empathize how great a singer this man is. He did well, he knows how to put a song together and would have given me entertainment in another time or worldly plain. I'm done.

Your feedback for FutureSex/LoveSounds