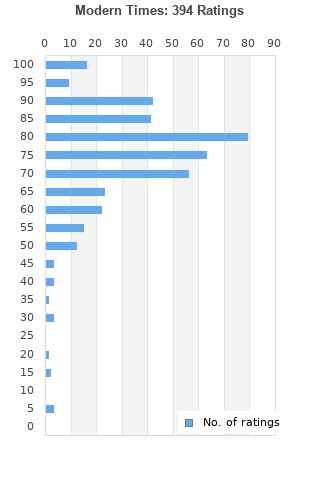 Modern Times is ranked 14th best out of 74 albums by Bob Dylan on BestEverAlbums.com.

The best album by Bob Dylan is Highway 61 Revisited which is ranked number 26 in the list of all-time albums with a total rank score of 35,894. 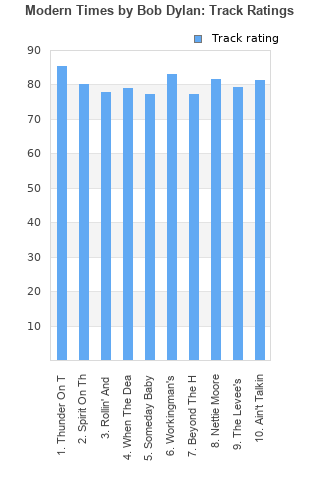 Rating metrics: Outliers can be removed when calculating a mean average to dampen the effects of ratings outside the normal distribution. This figure is provided as the trimmed mean. A high standard deviation can be legitimate, but can sometimes indicate 'gaming' is occurring. Consider a simplified example* of an item receiving ratings of 100, 50, & 0. The mean average rating would be 50. However, ratings of 55, 50 & 45 could also result in the same average. The second average might be more trusted because there is more consensus around a particular rating (a lower deviation).
(*In practice, some albums can have several thousand ratings)
This album is rated in the top 8% of all albums on BestEverAlbums.com. This album has a Bayesian average rating of 76.0/100, a mean average of 74.9/100, and a trimmed mean (excluding outliers) of 76.1/100. The standard deviation for this album is 14.8.

I really like this album. Bob seems to be energized and having fun throughout the ten songs and the band is top notch and sound like they're having fun as well. Some of this really ROCKS, especially the opener "Thunder On The Mountain". It has a wonderful Chuck Berry like sound to it and is my favorite on the album. The blues "remakes" are also quite good as well. If you're a Dylan fan or just love good, solid rock and roll, pick this one up. You won't be disappointed!

Ain't nothing modern about this album. The newest thing it presents is 60's blues rock, which I suppose does sound modern in comparison to the 40's pop ballads. That said, that doesn't make it bad. I just don't find anything particularly gripping about it.

Love this album, underrated here, I know it´s only blues and jazz, but this album got so much energy, that doesn´t feel like a copy-paste.

I don't quite understand why this album is so highly rated. I think it's a dreary album full of tired old twelve bars and derivative re-writes of old pop and folk tunes. Too many Dylan albums are like this these days. I must admit though I think working man blues is brilliant and thunder on the mountain and nettie Moore good but the rest, maybe apart from ain't talkin' are awful. Spirit on the water, is quite nice, with some nice harmonica at the end, but it goes on forever, and the lyrics would have been beneath Dylan in the sixties. Rollin''n'tumblin', the 'new' version of an old blues song is dreadful, so so boring. The levee's gonna break, is even worse,another 'new' version , and, when the deal goes down, is just a re-write of an old Bing Crosby song. Beyond the horizon,is also based on an old tune, red sails in the sunset. A lot of the lyrics are also stolen from older songs and poems too. Where's the invention,?, where's the originality? Dylan is simply not the force he once was. I mean, listen to this record and then listen to his classic sixties and mid-seventies albums. Stop encouraging this man with your over praising. Highway 61 and blonde on blonde it is not.

Decent, but not quite on par with Time Out of Mind and Love & Theft.

It's odd Most Bobheads rate Time Out Of Mind, Love & Theft and Tempest higher than this one. I tend to agree the others are "better" but which do I listen to more often? This one Modern Times. The age old debate I suppose "Best" vs "favorite". Anyhow I love this record. "Spirit On The Water", "When The Deal Goes Down" & "Nettie Moore" & "Workingman Blues" are the "creme de la Creme".. "Thunder On The Mountain" is great as well. Most regard "Ain't Talkin'" higher than I do but I really do like the track. I tend to like "Rollin & Tumblin" & "Beyond The Horizon" more than most Bob diehards, but hey I am right. "Someday Baby" is average. No "skipper" here for me. Well Levee gets a little monotonous & works better live but it's all good Thank you Bob! MEZ

Spirit on the Water is an underated gem.

Your feedback for Modern Times