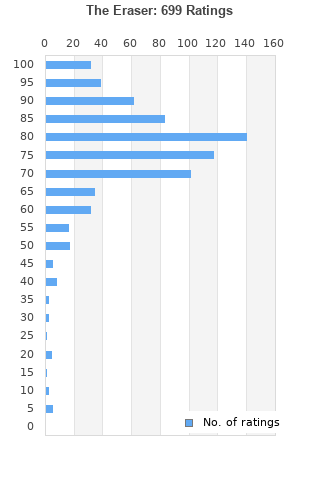 The Eraser is ranked as the best album by Thom Yorke. 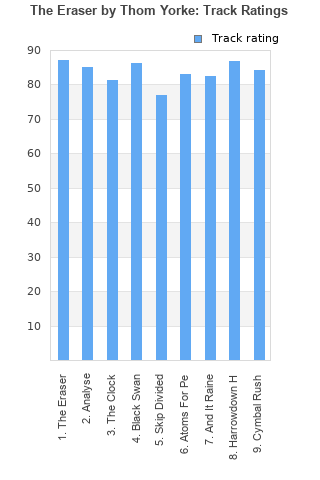 Rating metrics: Outliers can be removed when calculating a mean average to dampen the effects of ratings outside the normal distribution. This figure is provided as the trimmed mean. A high standard deviation can be legitimate, but can sometimes indicate 'gaming' is occurring. Consider a simplified example* of an item receiving ratings of 100, 50, & 0. The mean average rating would be 50. However, ratings of 55, 50 & 45 could also result in the same average. The second average might be more trusted because there is more consensus around a particular rating (a lower deviation).
(*In practice, some albums can have several thousand ratings)
This album is rated in the top 5% of all albums on BestEverAlbums.com. This album has a Bayesian average rating of 76.8/100, a mean average of 75.7/100, and a trimmed mean (excluding outliers) of 76.9/100. The standard deviation for this album is 15.4.

Gets better every listen. Vinyl far superior to digital, which is overly compressed (DR=6)

Likely the best of his solo work, Thom Yorke releases a blueprint on how to strike out on your own and cast your own light.

Imagine being surprised at hearing fragments of Radiohead's sound from an album by one-fifth of the band.

This CD is inconsistent and all (and if you physically own the CD, a bitch to get to), but the standouts here are great. The whole thing is very groovy, and sounds the most like the electronic-heavy bits off Hail to the Thief (if you told me Harrowdown Hill was a blooper from that album, I'd believe you), so if you dug Backdrifts you'll probably dig this whole thing. I feel it occasionally drags on at times (The Clock, Cymbal Rush), but if you're in the right mood it's great to zone out to. It's at its best when it packs conviction and melody, which is frequent, just not enough for a 9-track album.

I was not sure at first, but it became great after a few listens. Great cohesive album with strong tracks.

Disappointing album from the leader from my favorite band ever.

Very strong album. Sure it's not Radiohead but there aren't any bad songs and most of them are enjoyable, Cymbal Rush in particular.

Seriously underrated piece of music, well rounded and has great sound. Nigel godrich works wonders on the production and yorke is amazing with his audio control, lyrics, and sound progressions

A great album to just space out and let Thom's voice wash over your thoughts, dreams, and life.

One of my favorite albums.

Your feedback for The Eraser