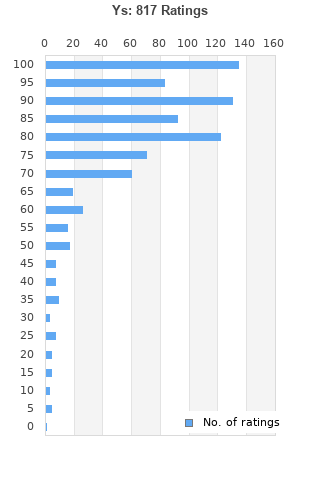 Joanna Newsom - And the Ys Street Band - CD - DC336CD - NEW
Condition: Brand New
Time left: 21h 33m 1s
Ships to: Worldwide
£12.30
Go to store
Product prices and availability are accurate as of the date indicated and are subject to change. Any price and availability information displayed on the linked website at the time of purchase will apply to the purchase of this product.  See full search results on eBay

Ys is ranked as the best album by Joanna Newsom. 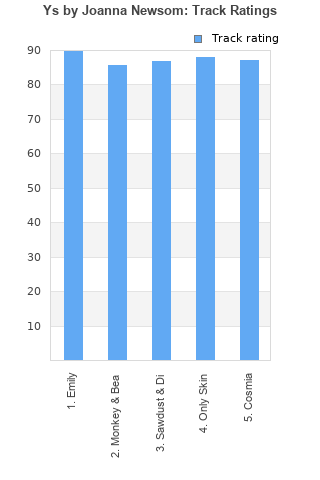 Rating metrics: Outliers can be removed when calculating a mean average to dampen the effects of ratings outside the normal distribution. This figure is provided as the trimmed mean. A high standard deviation can be legitimate, but can sometimes indicate 'gaming' is occurring. Consider a simplified example* of an item receiving ratings of 100, 50, & 0. The mean average rating would be 50. However, ratings of 55, 50 & 45 could also result in the same average. The second average might be more trusted because there is more consensus around a particular rating (a lower deviation).
(*In practice, some albums can have several thousand ratings)
This album is rated in the top 1% of all albums on BestEverAlbums.com. This album has a Bayesian average rating of 82.5/100, a mean average of 80.8/100, and a trimmed mean (excluding outliers) of 82.7/100. The standard deviation for this album is 18.5.

A very meditative in structure, her vocals totally deliver her imagery lyrics in a beautiful way. Quite hard to get into IMO, but, during my mental breakdown phase, this totally calms me down.

The vocals are the most puzzling aspect of this album for me. Sometimes they offer an eye-opening experience, but for the most part they are like a "keep out" sign that stops you from exploring all the almost magical stuff that's going on here.

Not super accessible and probably not for everyone. It took me a couple listens before it started to click, and for me to get use to Joanna Newsom's voice, but now I love it. Rewarding with more and more listens. Emily is probably the best and most accessible song on here, but the rest are great too.

Great to hear this album I like the way the harp is played and the orchestra is good set in scene and the voice of her is sublime. I have no standout track I like all. Very good

I was putting off listening to this because it's not on Spotify, but I was missing out!!

The music zeitgeist has seen its fair share of luminous storytellers but few vividly beseech their audience to partake in their free-flowing whimsy like balladeer-extraordinaire Joanna Newsom. Yet, when discussions of this generation's most profound creators, her name seems to reside on the periphery. This is an unspeakable injustice. To call her dexterous would be an understatement, having mastered the piano, harpsichord and the seldom-conquered pedal harp. These instrumental exploits have produced work that's drawn comparisons to the Romantic era, coupled with the singer's unmistakable, naturalistic vocals. Never has Newsom's music sounded more idyllic and enchanting than on 2006's Ys. Named after the mythical French city engulfed by the sea, the album is comprised of five long-form treatises which metaphorically recount four distinct experiences undergone by the harpist in the span of a year. The autobiographical nature of the subject matter enriches the poetry of the record and renders every lyric endlessly interpretable. Newsom's scholarly, fairy-tale epic is equal parts whimsical and irreplicable.

The fantasy-tinged odyssey materializes with opening number, Emily. The song is inspired by Newsom's astrophysicist sister and the revered moments shared between them. As you'd imagine, Joanna's harp is the centerpiece of the sprawling, musing procession. The might of the string section smolders behind her handiwork creating a sensation of perpetual motion that never allows the 12 minute opener to stall but rather to wander with concentrated beauty. Newsom's ability to rhapsodize approaches mythic plateaus on the track as she requests, "Let us go though we know it's a hopeless endeavor; the ties that bind, they are barbed and spined and hold us close forever; though there is nothing would help me come to grips with a sky that is gaping and yawning; there is a song I woke with on my lips as you sailed your great ship towards the morning." It's just one stone that resides within the collection of embarrassing riches of this era's greatest lyricist. Second track, Monkey & Bear, expands the sonic repertoire slightly but the songstress' harp still chaperones. The song flaunts calculated orchestral flutters buoying Newsom's unabridged poetic amendments. The thematic roots of the sweeping nine minute piece are entrenched in the legend of Ursa Major, a constellation in the frame of a bear. Potentially more personally akin to Newsom's experience, the song echoes sentiment of the damning effects staying steadfast in romantic kinship at the cost of surrendering personal independence. "Until we reach the open country, a-steeped in milk and honey; will you keep your fancy clothes on, for me; can you bear a little longer to wear that leash," she details. Album epergne, Sawdust and Diamonds, bears the sweetest of fruits. The track is bolstered by Newsom's sublime harp arpeggio that acts as the engine for the song's excellence. It also ranks as one of the finest lyrical labyrinths of her career. It communicates a moment of adversity between two lovers and ponders if said love will persevere or subside. "And in a moment of almost-unbearable vision, doubled over with the hunger of lions; hold me close, cooed the dove, who was stuffed, now, with sawdust and diamonds," Newsom sings with fragility. It's a harrowing excursion that remains one of the artist's most ethereal yet lucid declarations. Its tendency to induce tears is formidable.

Only Skin, is a serpentine account of the events that befell Joanna during the year that inspired the album and the interrelation between those fragments. The track is Ys' most sonically voluptuous as it features backing vocals from Bill Callahan and burly cello contributions. The tuneful escalation does not supersede Newsom's poetry, however. She protests, "But always up the mountainside you’re clambering, groping blindly, hungry for anything; picking through your pocket linings, well, what is this; scrap of sassafras, eh Sisyphus," as she alludes to a partner's polygamous lust. Only Skin transmutes multiple times throughout its 17 minute runtime, punctuating Newsom's ability as a virtuoso spinner of feminine, fantasy sagas. The album comes to rest with Cosmia, where Joanna calls upon moths to lead her to the warming light of solace. Her vocal work is her mightiest here, as she calls for her "little darling" and how she misses a particular "precious heart". Additionally, the heavenly falsettos she unleashes joyously contrast backing accordion hums. She asks, "Can you hear me; Will you listen; don't come near me; don't go missing, and in the lissome light of evening, help me, Cosmia; I'm grieving."

It's important to step back slightly and gaze at the mountainous mosaic that Newsom has architected. It's tremendously difficult to synthesize one's intimate thoughts into such a boundless tapestry of wordplay and metaphor. On Ys, Joanna Newsom seems to operatively channel her convictions while remaining blissfully, beautifully unfazed by the rigors that would derail mortal songwriters. This is not Newsom's lyrical coming out party as she was profoundly bardic on 2004's The Milk-Eyed Mender, but the poeticism has ballooned into a hulking behemoth on Ys, all the while bending one of the world's most challenging instruments to her will. It's clearly difficult to be humble when describing the young woman's ever-blooming genius. I'll just leave the humility to her as it seems to come her naturally as all things inherently do. With a quartet of albums under her belt, she's likely to have more future triumphs and adornments affixed to her name. Still, she'd be hard-pressed to outdo her chamber folk paragon. It's a carefully constructed journey of enlightening pain and a promise of subsequent emotional provision. It is destined to harbor the necessary magic native to the fantasy settings that which galvanized its creation. Ys is simply a fossilized memento of a forgotten and forlorn age, washed up on a forbidden shore as considerate waves propel it lovingly toward you.

"From the top of the flight,
Of the wide, white stairs,
Through the rest of my life,
Do you wait for me there?"

Joanna Newsom recorded one of the most disconcerting albums of the 2000's, "Ys". A spellbinding album made up of five tracks, the shortest of which is just over seven minutes and the longest almost seventeen. The baroque universe of this album is entirely formed and based on unusual instruments, which come out of the routine of rock and folk. It is an orchestra of strings that illuminate the voice of Joanna, and finally, the harp is discreet. Newsom, from his most intimate experiences, builds stories that are fairy tales. The beauty of the whole lies in the synthesis between a multiplicity of worlds, allowed by the fluid narratives of the singer, her mutinous phrasing and overflowing sincerity. "Ys" floats in a stratosphere made up of a multitude of horizons. His cosmos is as literary as it is musical. In any case, you come out with your heart broken, and to be cured, you can do nothing, you just have to re-plunge into the album.

Your feedback for Ys