Sam's Town (studio album) by The Killers (US) 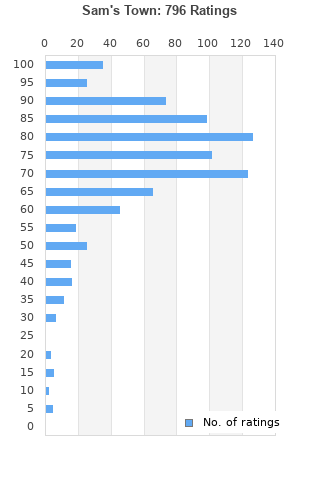 Sam's Town is ranked 2nd best out of 11 albums by The Killers (US) on BestEverAlbums.com.

The best album by The Killers (US) is Hot Fuss which is ranked number 194 in the list of all-time albums with a total rank score of 9,144.

RA and A Killers Confession
The Winchester, Lakewood, United States. 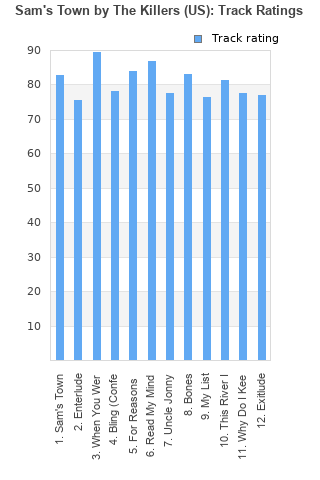 Rating metrics: Outliers can be removed when calculating a mean average to dampen the effects of ratings outside the normal distribution. This figure is provided as the trimmed mean. A high standard deviation can be legitimate, but can sometimes indicate 'gaming' is occurring. Consider a simplified example* of an item receiving ratings of 100, 50, & 0. The mean average rating would be 50. However, ratings of 55, 50 & 45 could also result in the same average. The second average might be more trusted because there is more consensus around a particular rating (a lower deviation).
(*In practice, some albums can have several thousand ratings)
This album is rated in the top 24% of all albums on BestEverAlbums.com. This album has a Bayesian average rating of 74.3/100, a mean average of 73.2/100, and a trimmed mean (excluding outliers) of 74.3/100. The standard deviation for this album is 16.6.

Going to see them live with a mate. I'm not overly familiar with their stuff yet though, so here I am catching up before the gig. I prefer this to Hot Fuss. It does wear the Springsteen influence on its sleeve, but I think the songwriting is a bit better, and I prefer the slightly rootsier production to the at times overly-polished debut. Also like that they sound American. Why pretend to be British when you're not? That's not to say the debut isn't a good album; it is. I just like this one better, though it's arguably just as uneven.

Some great highlights on this album, but a lot of filler too. When You Were Young, Bones, Reasons Unknown and Read My Mind are all great but there is little to shout about with the rest.

Note 2: Add this to the list of all time iconic album covers

This record was a huge part of my love of Indie rock. A lack of hit singles was the best thing that could have happened to this record. Instead of a collection of hits(like Hot Fuss), Sam's Town is better swallowed whole(especially made relevant by the FANTASTIC Interlude and Exitlude) The Killers wore their Springsteen-influence on their sleeves but its still very much a record that sounds like no other.

I'd put this higher than the Hot Fuss. There's a better distribution of quality on the album and, though I think the overall concept is okay, the quality of the songs is pretty high. They tap more into a Heartland Rock vibe and capture vistas somewhat well. I don't know if they come close to those Springsteen storytelling heights, though, so that, along with 2 of these songs, knocks the album down for me.

But there's no denying that Sam's Town, When You Were Young, For Reasons Unknown, Read My Mind, and This River is Wild are all great songs and, in my opinion, rival the classics off Hot Fuss.

This is easily their best album for me (though Hot Fuss is certainly wonderful). Brandon's vocals and lyrics are excellent on this album and in my opinion an improvement from Hot Fuss. He's definitely matured as a vocalist and songwriter. Rest of the band is top notch.

This is The Killers at their best in my opinion. Hot Fuss is great but this album goes another level higher with more raw emotion and story telling. All songs are brilliant from the opening Sam's Town to When You Where Young (their best live song) to Read My Mind to Bones and well the darn whole album. A perfect album! 100/100!

So much better than Hot Fuss - they learned to spread out the better songs, making for an enjoyable listen throughout.

This is my absolute favorite album of all time! It's really interesting reading the comments, a lot of people think Hot Fuss was better. For me, Sam's Town tops them all. Cool that music affects us all differently!

A good album - not as interesting as Hot Fuss for me.
Love Uncle Johnny, My List and Exitlude. Much of it is good rather than great though

Your feedback for Sam's Town