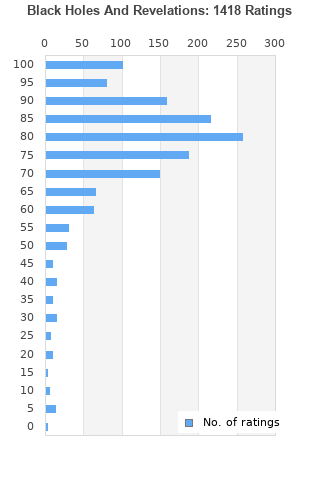 Black Holes And Revelations is ranked 3rd best out of 17 albums by Muse on BestEverAlbums.com.

The best album by Muse is Absolution which is ranked number 181 in the list of all-time albums with a total rank score of 9,607. 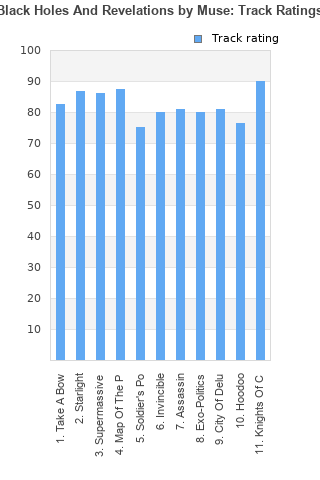 Map Of The Problematique
Rating: 87 (338 votes)Comments:

Rating metrics: Outliers can be removed when calculating a mean average to dampen the effects of ratings outside the normal distribution. This figure is provided as the trimmed mean. A high standard deviation can be legitimate, but can sometimes indicate 'gaming' is occurring. Consider a simplified example* of an item receiving ratings of 100, 50, & 0. The mean average rating would be 50. However, ratings of 55, 50 & 45 could also result in the same average. The second average might be more trusted because there is more consensus around a particular rating (a lower deviation).
(*In practice, some albums can have several thousand ratings)
This album is rated in the top 3% of all albums on BestEverAlbums.com. This album has a Bayesian average rating of 78.0/100, a mean average of 76.5/100, and a trimmed mean (excluding outliers) of 78.0/100. The standard deviation for this album is 17.5.

Muses music is not my music. It is too noisy, bombastic, and genre-wise too difficult to place. Hard rock, metal, industrial, alternative, shoegazing, operatic, what ?. Choosing one genre is usually sufficient

Not the biggest Muse fan, but you can't not get a kick out of Starlight (although overplayed), Supermassive Black Hole, Invincible and Knights of Cydonia. The rest is mostly filler though, it's much less consistent than The Resistance which is my favourite Muse album.

This was my entry level to Muse in about 2017 having missed them entirely. It was energetic and big sound - I loved it, got into their back catalogue and regard them as one of my favourite bands.

This is quite a different record to their previous work and there is definitely a few more risks taken. One highlight of this is that the vocal performance is a lot more varied and it is stretched really well making for more unique sounding songs like Supermassive Black Hole. The instrumentation is also very good on most tracks with the guitar work being the standout. However, the record is a lot less consistent with there being several filler tracks which is rare to find on a muse album. Also, I found myself losing interest after about the mid way point as most of the standout tracks come in the first half except for the closing song which is brilliant. On the whole, this is not their best work but it is very interesting to explore and there are some great cuts to find on here.

Their first misstep. Still, the opening and closing tracks are amazing, up there with their best stuff.

Muse is the type of band that makes it hard to have a strong opinion about. It's clean... too clean maybe... but it's nice I guess.

I like the album though it's not as good as its two predecessors. The change in their sound is not bad (at this point) and very enjoyable in some moments of the record. I feel like like there are some fillers, but it's great overall, and ends with a masterpiece.

Your feedback for Black Holes And Revelations