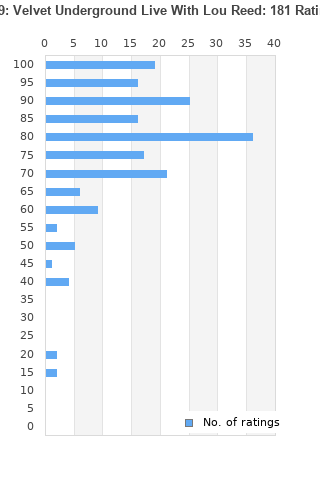 Listen to 1969: Velvet Underground Live With Lou Reed on YouTube 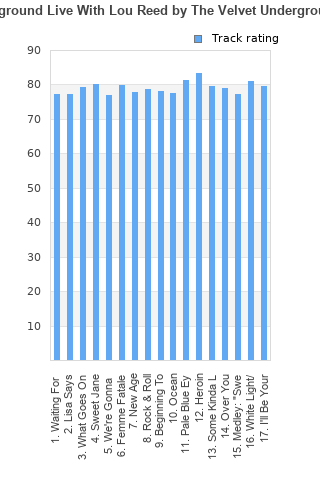 Rating metrics: Outliers can be removed when calculating a mean average to dampen the effects of ratings outside the normal distribution. This figure is provided as the trimmed mean. A high standard deviation can be legitimate, but can sometimes indicate 'gaming' is occurring. Consider a simplified example* of an item receiving ratings of 100, 50, & 0. The mean average rating would be 50. However, ratings of 55, 50 & 45 could also result in the same average. The second average might be more trusted because there is more consensus around a particular rating (a lower deviation).
(*In practice, some albums can have several thousand ratings)
This album is rated in the top 2% of all albums on BestEverAlbums.com. This album has a Bayesian average rating of 79.8/100, a mean average of 78.8/100, and a trimmed mean (excluding outliers) of 80.2/100. The standard deviation for this album is 16.6.

This album might be the best live recording ever. You can really feel the dirty, magic, inebriating atmosphere in those clubs while the VU was playing. What goes on, New age... the band gave the songs a new level of epic and thats what makes a live session an eternal classic!

This is not the VU with Nico and John Cale. This Unit is responsible for their self titled and Loaded albums. That being said this is an awesome live album full of different arrangements of some of their most well known material. I would say particularly the versions of Heroin (1st one) and Sweet Jane are better than the studio versions.

favorite live album, everything that makes me love the vu

Simply one of the greatest live albums ever produced capturing the band at their compulsive and visceral best. The epic brilliance of 'What Goes On' just has to be heard to be believed.

Your feedback for 1969: Velvet Underground Live With Lou Reed