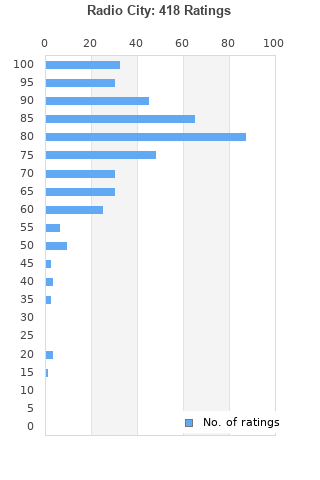 Radio City is ranked 3rd best out of 17 albums by Big Star on BestEverAlbums.com.

The best album by Big Star is #1 Record which is ranked number 395 in the list of all-time albums with a total rank score of 4,801.

HOLIDAY JUKEBOX with: Dave DAMIANI& The No Vacancy Orchestra and special guest, a Platinum Recording artist and Film Star, to be announced on Nov. 29
Catalina Bar & Grill, Hollywood, United States. 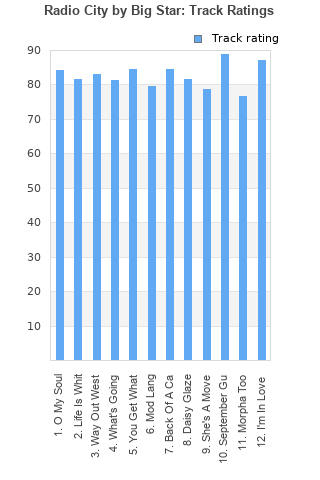 Rating metrics: Outliers can be removed when calculating a mean average to dampen the effects of ratings outside the normal distribution. This figure is provided as the trimmed mean. A high standard deviation can be legitimate, but can sometimes indicate 'gaming' is occurring. Consider a simplified example* of an item receiving ratings of 100, 50, & 0. The mean average rating would be 50. However, ratings of 55, 50 & 45 could also result in the same average. The second average might be more trusted because there is more consensus around a particular rating (a lower deviation).
(*In practice, some albums can have several thousand ratings)
This album is rated in the top 2% of all albums on BestEverAlbums.com. This album has a Bayesian average rating of 79.6/100, a mean average of 78.9/100, and a trimmed mean (excluding outliers) of 79.7/100. The standard deviation for this album is 14.1.

Almost as good as #1 Record.

At this point I prefer #1 Record as I think it has more standouts and memorable hooks. However the production on Radio City is absolutely brilliant. Somehow it balances a contagious feel of rawness and excitement while also providing an excellent bed for the songs to exist upon.

After repeated spins, I find I'm just not that into this collection of songs compared to other Big Star releases.

As a direct sequel to the previous record, Big Star's 2nd album has the same catchy power pop sound that set them apart from other bands at the time. The band tried again to gain significant success, but alas, luck just wasn't on their side.

This album is a dead set classic , under rated , under appreciated & criminally ignored . Look no further than 'September Girls' , 'I'm In Love With a Girl' , 'She's A Mover ' and 'Life Is White' for proof

This has always been my favourite Big Star album. Radio City is slightly messy and off kilter, which gives it an extra edge; the last two songs gain impact through their presentations as rough demos.

Another excellent rock'n'roll album from Big Star. Gone are the over the top vocals of the first LP. Radio city, like #1 record, it's full of fantastic rock anthems. Underrated and overlooked.

Your feedback for Radio City