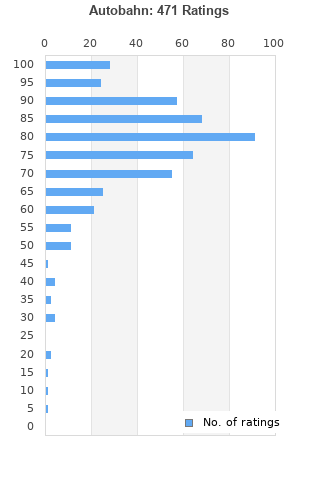 Autobahn is ranked 4th best out of 20 albums by Kraftwerk on BestEverAlbums.com.

The best album by Kraftwerk is Trans Europa Express which is ranked number 292 in the list of all-time albums with a total rank score of 6,487. 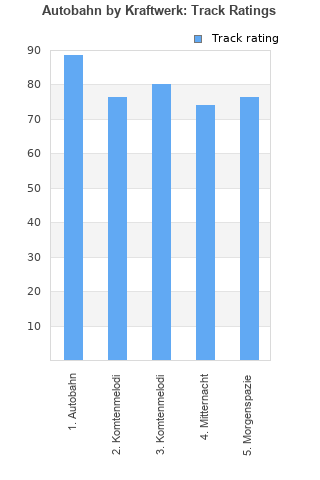 Rating metrics: Outliers can be removed when calculating a mean average to dampen the effects of ratings outside the normal distribution. This figure is provided as the trimmed mean. A high standard deviation can be legitimate, but can sometimes indicate 'gaming' is occurring. Consider a simplified example* of an item receiving ratings of 100, 50, & 0. The mean average rating would be 50. However, ratings of 55, 50 & 45 could also result in the same average. The second average might be more trusted because there is more consensus around a particular rating (a lower deviation).
(*In practice, some albums can have several thousand ratings)
This album is rated in the top 3% of all albums on BestEverAlbums.com. This album has a Bayesian average rating of 78.4/100, a mean average of 77.5/100, and a trimmed mean (excluding outliers) of 78.5/100. The standard deviation for this album is 14.4.

A great first half is let down by a massively disappointing second half that really drags the whole record down in my opinion. The majority of that second side could be cut as it is a lot of filler content. It seems to lack all that Kraftwerk charm and infectiousness that they had on the first track while maintaining their more experimental style. On the second half it just seems to be all experimental with them trying to make the craziest sounds possible at the time of recording. This does not make for enjoyable listening for us for the most part. Overall, the titles track is fantastic and with its length it really does carry this record and makes it worth a listen.

This was my first listening to Kraftwerk and that album was really impressive, especially considering it is from 1974.

techno instrumentation truly is something original

Autobahn suffers from 2112 syndrome; an amazing 20 minute epic on one side of the record, encompassing everything great the group had done up to that point, followed by a seemingly random assortment of good songs on the other side that pale in comparison to the first song/side, making for a puzzling album to discern. Should it be called great just because that one song is great, or should it be called mediocre because the rest isn't up to snuff? In the case of Kraftwerk, the music they made always appealed to a specific audience (again, much like Rush) that gobbled this up, and I enjoy it greatly as well.

Kraftwerk's fourth studio album marked a dramatic change in genre, from Krautrock jams to progressive electronic music, and what a refreshing revamp. The 22 minute title track is, simply put, one of the best tracks of all time. Innovative and transporting, "Autobahn" is a sublime track with Kraftwerk's trademark humour and playfulness sprinkled on top. Side B is also transporting as it takes you on a journey down the autobahn through the dead of night leading into the beautiful morning on "Morgenspaziergang" complete with tuneful flutes! A seamless, landmark journey. Wir fahren fahren fahren auf der Autobahn!

VERY nice to listen to if you want to relax. The title cut is my favorite by the band. It's hypnotic sound draws you in to what it must actually be like while you're driving on the Autobahn! This is just a wonderful listening experience.

Your feedback for Autobahn