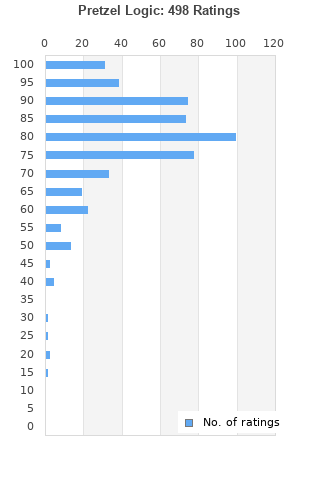 Pretzel Logic is ranked 4th best out of 21 albums by Steely Dan on BestEverAlbums.com.

The best album by Steely Dan is Aja which is ranked number 184 in the list of all-time albums with a total rank score of 9,477. 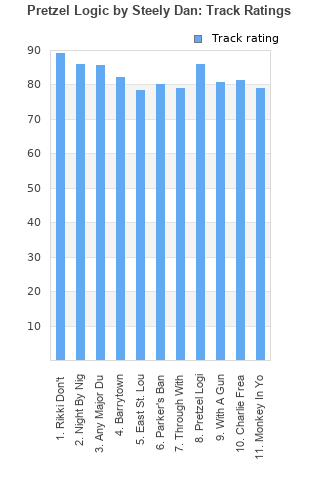 Rating metrics: Outliers can be removed when calculating a mean average to dampen the effects of ratings outside the normal distribution. This figure is provided as the trimmed mean. A high standard deviation can be legitimate, but can sometimes indicate 'gaming' is occurring. Consider a simplified example* of an item receiving ratings of 100, 50, & 0. The mean average rating would be 50. However, ratings of 55, 50 & 45 could also result in the same average. The second average might be more trusted because there is more consensus around a particular rating (a lower deviation).
(*In practice, some albums can have several thousand ratings)
This album is rated in the top 2% of all albums on BestEverAlbums.com. This album has a Bayesian average rating of 80.2/100, a mean average of 79.7/100, and a trimmed mean (excluding outliers) of 80.4/100. The standard deviation for this album is 13.5.

This was definitely a nice listen, one of the better Steely Dan's albums I've heard.

not the best of these two geniuses but pretty darn good

Pretzel Logic is probably Steely Dan's most concise and variable work. It contains a wealth of ideas and musical sketches while the band was at a crossroads between its early rock sound and its later smooth rock sound.

Another fine outing from Steely Dan. Nothing super special here except Rikki Don't Lose That Number and the title track. Their blend of jazz, rock, and pop is easily the most interesting thing about this record.

While not my favorite, this is still essential Dan. This album is full of that cerebral jazzy rock that's just a little off kilter or even just slightly disturbing but ultimately compelling.

An inconsistent album in tone and quality. Tracks 5-7 are duds. 'With a Gun' is almost a country song. The rest are mostly jazzy, some folkier than others. The album may be too polished for it's own good as well. Other Steely Dan albums go well with the clean production, but this one feels sterile. 'Rikki...' and 'Any Major Dude...' stand as some of their best tracks, but most of the others just aren't as well-written.

I'm not a big fan, but I think this is their best (or as good as it could get for me)

One of my all-time favorite albums.

Your feedback for Pretzel Logic