No Other (studio album) by Gene Clark 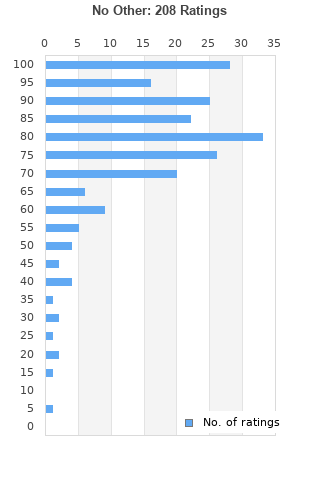 No Other is ranked as the best album by Gene Clark. 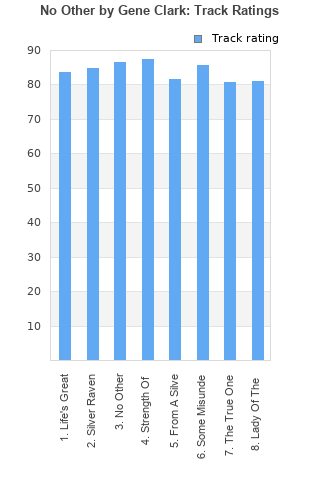 Rating metrics: Outliers can be removed when calculating a mean average to dampen the effects of ratings outside the normal distribution. This figure is provided as the trimmed mean. A high standard deviation can be legitimate, but can sometimes indicate 'gaming' is occurring. Consider a simplified example* of an item receiving ratings of 100, 50, & 0. The mean average rating would be 50. However, ratings of 55, 50 & 45 could also result in the same average. The second average might be more trusted because there is more consensus around a particular rating (a lower deviation).
(*In practice, some albums can have several thousand ratings)
This album is rated in the top 2% of all albums on BestEverAlbums.com. This album has a Bayesian average rating of 79.5/100, a mean average of 78.6/100, and a trimmed mean (excluding outliers) of 79.9/100. The standard deviation for this album is 18.4.

It's interesting that both Gram Parsons and Gene Clark, both ex-Byrds, went on to perfect their versions of "cosmic" folk rock infused with traditional country music structures. Parsons was all style, Clark was more substance. Gram Parsons is fun and flashy, while Parsons is intellectual and introspective.

Give them both a listen: Gram Parsons' "Grievous Angel" and Gene Clark's "No Other."

Best Tracks: Strength Of Strings, The True One

Is this the greatest country rock album of all time? There are so many nights I feel that way. The songs are simply majestic. The type of songs that make me feel like I can take on the entire world no matter what the odds. And I need that kind of music in my life. Songs that make me want to shirk off the shackles of my self destructive ways and once more reach for something bigger than myself. Plus, the guitar on this just destroys me and the lyrics are second to none.

The only problem with this album, and it's a big one, is that it peters out towards the end on those last two songs. Considering the album's only 8 tracks long that's kind of lame. But those first six tracks? Totally essential, mind-blowing stuff that fires me up like little else.

Grade: A. Cosmic Country Rock at it's best. Since it's a tad inconsistent at the end, it's not ever going to get top billing. But these are my fighting songs right now so I'm going to slide it into the number two pole at least for now.

An excellent album from ex-Byrd Gene Clark. No other, is a wonderfully ambitious record featuring some superb songs. Best of the tracks are, strength of strings, the title track, and, from a silver phial, which is my favourite track cut. No other, was sadly a major commercial disappointment and something which Clark apparently never got over. It is now quite rightly regarded as a classic. Excellent stuff.

The Byrds' greatest songwriter ! No other could make an album as perfect and moving as this! Timeless and divine music ! It should have been a number one in a righteous universe!

A critical and commercial failure? A landmark record. This one you ought to listen: hands down one of the best (rock) records ever made.

Love this albums. Every track is great but my fav is 'Strenght of Strings'

A strange album of best member of The Byrds. The songwriting of Gene Clark shines in dangerous and fragile aspects. Lisergic and ethereal. Further definitions.

Your feedback for No Other