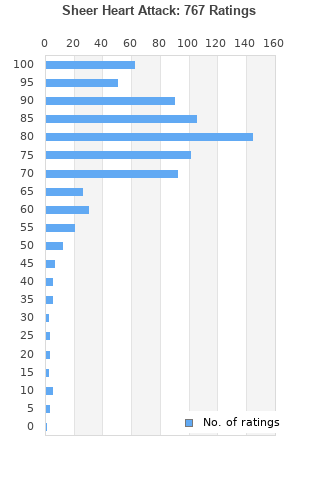 Sheer Heart Attack is ranked 2nd best out of 51 albums by Queen on BestEverAlbums.com.

The best album by Queen is A Night At The Opera which is ranked number 97 in the list of all-time albums with a total rank score of 14,861. 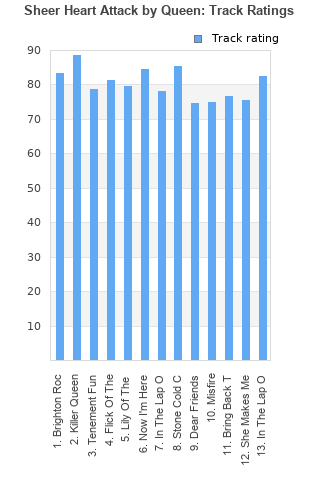 Rating metrics: Outliers can be removed when calculating a mean average to dampen the effects of ratings outside the normal distribution. This figure is provided as the trimmed mean. A high standard deviation can be legitimate, but can sometimes indicate 'gaming' is occurring. Consider a simplified example* of an item receiving ratings of 100, 50, & 0. The mean average rating would be 50. However, ratings of 55, 50 & 45 could also result in the same average. The second average might be more trusted because there is more consensus around a particular rating (a lower deviation).
(*In practice, some albums can have several thousand ratings)
This album is rated in the top 2% of all albums on BestEverAlbums.com. This album has a Bayesian average rating of 79.1/100, a mean average of 77.8/100, and a trimmed mean (excluding outliers) of 79.2/100. The standard deviation for this album is 15.9.

Some good moment, but overall far from the best queen album imo.

Starts with a hiss and a roar. About half are really decent tracks. But I find half of this is also fluff that doesn't do anything for me.

Great album with amazing vocals and guitar work, highly underrated on this site I think. Beginning tracks are the best and it kinda lose it by the end, but overall it still stands strong.

The first side of this album is an absolute gem. All tracks score between 75-90 and very reminiscent of The Who's Quadrophenia. The opening three tracks Brighton Rock, Killer Queen and Tenement Funster is an incredible kick start to the album and my favourite tracks. If rating side A then 85 but the flip side disappoints and scores 60, yet still a big improvement over Queen II.

Their diversity is still there, but this is more balanced, consistent and accessible than "Queen II", so I view this as a marginally better album(still very close though). Overall, 70/100.

I'm a Queen fan because of albums like this, and this truly is an excellent album, jam packed with great tracks and hidden gems.
It starts with Brighton Rock, which recently had renewed interest due to the Baby Driver movie. It's a top notch track that shows off just how great Brian May's guitar playing really is.
That's followed up by Killer Queen. Little needs to be said about this one. Everyone knows it.
Then comes the three songs that blend into one another - Tenement Funster, Flick of the Wrist, and Lily of the Valley - which is truly amazing, and those three tracks are some of my favourite that Queen's ever done.
Now I'm Here is a great catchy rock number. What an excellent first side to an album.
Then side two starts with In the Lap of the Gods. I particularly love the way this track starts. A strong opener for side two. Then comes Stone Cold Crazy, the track Q magazine described as "thrash metal before the term was invented". It's a great fun heavy rocker. Dear Friends gives us something more melodic and mellow, before we get onto a Deacon track, Misfire. Which is a decent pop-rock song. Bring Back That Leroy Brown is an incredibly clever track. It really shows just how diverse Queen were. She Makes Me (Stormtrooper in Stilettos) is both haunting and wonderful. Such an underrated gem. And then the album finishes perfectly with the anthemic In the Lap of the Gods... Revisited. All in all one of my favourite albums ever. Brilliant album.

I´m a Queen-Fan. But, in my opinion, this album is very overrated. There are only three really good songs, maybe four: Killer Queen, Now I'm here, Stone Cold Crazy, In the lap of the gods.
That wouldn't be so bad yet.
But the other 8 songs are too weak.
PS: I am listenting to Queen over 25 years, since I was 9 years old

Your feedback for Sheer Heart Attack