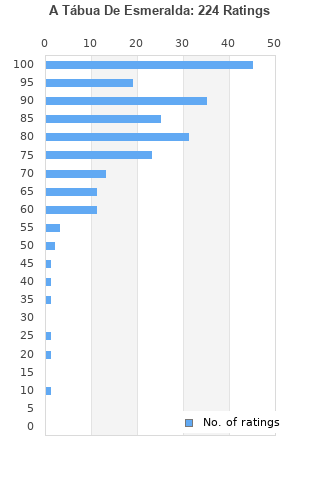 A Tábua De Esmeralda is ranked as the best album by Jorge Ben. 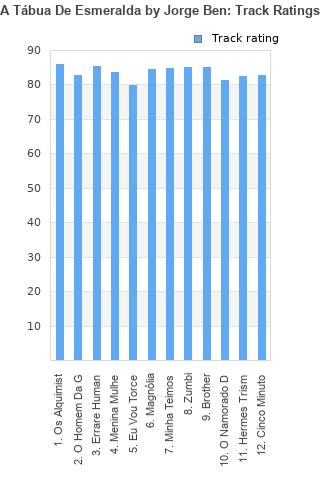 Rating metrics: Outliers can be removed when calculating a mean average to dampen the effects of ratings outside the normal distribution. This figure is provided as the trimmed mean. A high standard deviation can be legitimate, but can sometimes indicate 'gaming' is occurring. Consider a simplified example* of an item receiving ratings of 100, 50, & 0. The mean average rating would be 50. However, ratings of 55, 50 & 45 could also result in the same average. The second average might be more trusted because there is more consensus around a particular rating (a lower deviation).
(*In practice, some albums can have several thousand ratings)
This album is rated in the top 1% of all albums on BestEverAlbums.com. This album has a Bayesian average rating of 83.5/100, a mean average of 82.8/100, and a trimmed mean (excluding outliers) of 84.0/100. The standard deviation for this album is 15.6.

One of several of Jorge's masterpieces, but for some reason it has gained a higher cult status than the others. His next record, "Salta o Pavão", is as good as this one, but it's way less remembered...

It's one of his last acoustic efforts, with the theme of alchemy running through several of the tracks; as usual, his lyrics are at the same time poetical and funny, with verses like "I will cheer for celestial agriculture" (he tries to sing in English in "Brother", but it's nearly incomprehensible; it's the only track in the whole album that's not great). One of the best songs, "Zumbi", talks about the quasi-mythical black leader during slavery times in Brazil; the last one, "Cinco Minutos", is a rare example of a sad song written by Jorge _ and it's sublime (Black Eyed Peas sampled it for the "Positivity" track, but the result is pretty trashy; how can you screw up something so beautiful?).

"The Emerald Tablet" is a gorgeous, exciting record and a must-listen to all who enjoy good guitar playing and richly rhythmic music. If it's too exotic for you at first, keep at it, I'm sure it will grow on you.

it was good, nothing more

Essential brazilian album. One of my favorites by Jorge Ben for sure. Need To know!!!

Excellent album. Named by Rolling Stone Brazil as the 6th best album in the history of Brazilian music. In my opinion, "Africa Brasil" by Jorge Ben is better, but "A Tabua de Esmeralda" is also a great album that has lots of great songs like: "Os Alquimistas Estao Chegando", "O Homen Da Gravata Florida", "Minha Teimosia, Uma Arma Para Te Conquistar" and "Zumbi". I like the mix of Brazilian rhythms and topics with 70's style music, especially funk.

Your feedback for A Tábua De Esmeralda