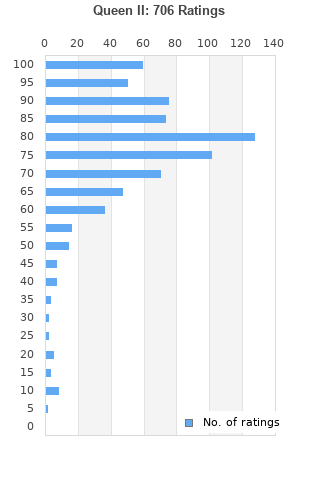 Queen - Queen II (1974) Fame Cassette Tape
Condition: Very Good
Time left: 21m 4s
Ships to: Worldwide
£4.99
Go to store
Product prices and availability are accurate as of the date indicated and are subject to change. Any price and availability information displayed on the linked website at the time of purchase will apply to the purchase of this product.  See full search results on eBay

Queen II is ranked 3rd best out of 49 albums by Queen on BestEverAlbums.com.

The best album by Queen is A Night At The Opera which is ranked number 97 in the list of all-time albums with a total rank score of 15,903. 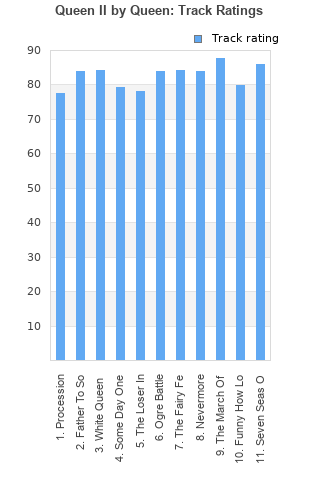 The March Of The Black Queen
Rating: 87 (199 votes)Comments:

Rating metrics: Outliers can be removed when calculating a mean average to dampen the effects of ratings outside the normal distribution. This figure is provided as the trimmed mean. A high standard deviation can be legitimate, but can sometimes indicate 'gaming' is occurring. Consider a simplified example* of an item receiving ratings of 100, 50, & 0. The mean average rating would be 50. However, ratings of 55, 50 & 45 could also result in the same average. The second average might be more trusted because there is more consensus around a particular rating (a lower deviation).
(*In practice, some albums can have several thousand ratings)
This album is rated in the top 3% of all albums on BestEverAlbums.com. This album has a Bayesian average rating of 78.1/100, a mean average of 76.5/100, and a trimmed mean (excluding outliers) of 78.1/100. The standard deviation for this album is 17.4.

The cover is great but everything goes downhill from there. Some excellent playing, interesting production but it's all a prog/metal over the top mess with weak to no songs. What exactly is Father to Son about? The lyrics are the worst! A very dated combination of Tolkein gibberish and cole's notes Shakesepeare.

The whole idea with white and black side doesn't really work, the album is so unbalanced. There are some great moments in the black side, but I would skip the white side without much hesitation. Overall, 70/100.

I never liked this record. It sounds like scraps from the first record and there's nothing interesting going on with any aspect of this record. I think the band were all comatose for the majority of the recording process of this record. The new rendition of Seven Seas of Rhye is the only thing Queen II has going for it, but the original is better anyway, so I have no reason to even listen to this. The cover is cool. I can't think of anything else nice to say about this album.


347/5000
It's one of the first Queen albums I've heard. Very innovative, colorful, imaginative and to some extent unrepeatable. After Queen II, no similar albums were released by Queen.
You will hardly find a weak spot on this album. Maybe just Funny how love is.
The best songs are: March of the Black Queen, White Queen, Ogre Battle, Fairy Feller Mater Stroke

Favorite Tracks:White Queen (as It Began), Ogre Battle, The March Of The Black Queen

This was awesome. Nevermore and March Of The Black Queen are my favorites.

While on their later records they blanded the theatrical sound perfectly with the hard rock, on this album it sounds like listening to a musical with guitars. Sometimes it even sounds like the guitars act like fucking sound effects. It’s certainly better than some other glam and hard rock acts of the time, but it comes scary close to the “reluctantly banging your head”-sound of AC/DC and Kiss.

This is one of the best Queen albums. It shows that the band was much better when they took risks. The theatrical progressive rock here blows away any tame classic rock sounds this album has to offer.

Procession is a decent intro, but also aids well in allowing the album to flow with how it seamlessly ties into Father & Son. Both Father & Son and White Queen are highlights, the former showing a bit of Queen's heavier side. From there the next two songs are by far the worst for me. Not at all into Brian May's Some Day One Day, and Roger Taylor's The Loser In The End is highly forgettable to me other than the cool percussive intro. This part of the album just suffers from Lack-of-Freddie-itis.

Ogre Battle picks the album right back up again and begins a string of great and eclectic Queen compositions that doesn't let up until the album is over.

Your feedback for Queen II