On The Beach (studio album) by Neil Young 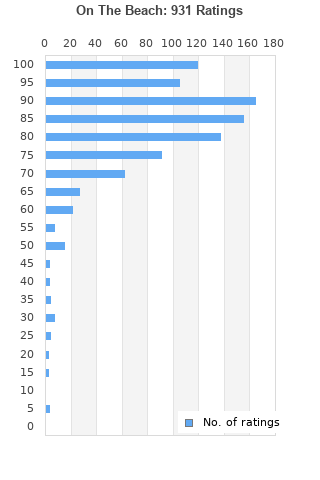 On The Beach is ranked 3rd best out of 81 albums by Neil Young on BestEverAlbums.com.

The best album by Neil Young is After The Gold Rush which is ranked number 78 in the list of all-time albums with a total rank score of 18,310. 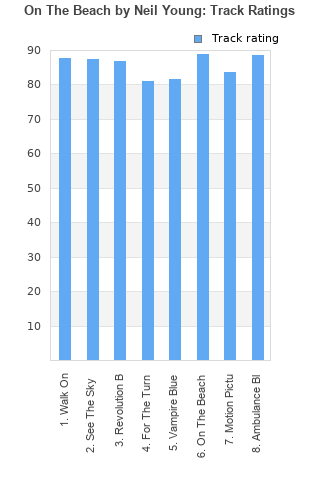 On The Beach rankings

On The Beach collection

Rating metrics: Outliers can be removed when calculating a mean average to dampen the effects of ratings outside the normal distribution. This figure is provided as the trimmed mean. A high standard deviation can be legitimate, but can sometimes indicate 'gaming' is occurring. Consider a simplified example* of an item receiving ratings of 100, 50, & 0. The mean average rating would be 50. However, ratings of 55, 50 & 45 could also result in the same average. The second average might be more trusted because there is more consensus around a particular rating (a lower deviation).
(*In practice, some albums can have several thousand ratings)
This album is rated in the top 1% of all albums on BestEverAlbums.com. This album has a Bayesian average rating of 84.0/100, a mean average of 82.9/100, and a trimmed mean (excluding outliers) of 84.1/100. The standard deviation for this album is 14.5.

Good album, but not the greatest Neil Young, probably the most I like Revolution Blues and Ambulance Blues and titoe track is pretty impressive, but songs like For The Turnstiles and Vampire Blues are really overwhelming for me.

Neil Young is a solid songwriter, this is a great early album. It is very similar in tones to his earlier, rather dark in chord and key choices.
Picks: On The Beach, Walk on, See the sky, all the blueses
So not a bad track here

Side A hits hard, but I'm not quite as into the slower second side.

Neil Young's best, if you ask me. On the Beach contains Neil Young's most interesting instrumentation on a record, his best songwriting and performances, and not one good song, because they're all great. He nailed it with this one.

A dark and beautiful album. I have to be in a certain mood to be able to listen to this it, but when I am in the right mood there is nothing better. Its such a breezy listen, but one of Neil's best albums. See the Sky About to Rain might be my all time favorite Neil Young song.