Crime Of The Century (studio album) by Supertramp

Crime Of The Century by Supertramp
Year: 1974
Overall rank: 270th 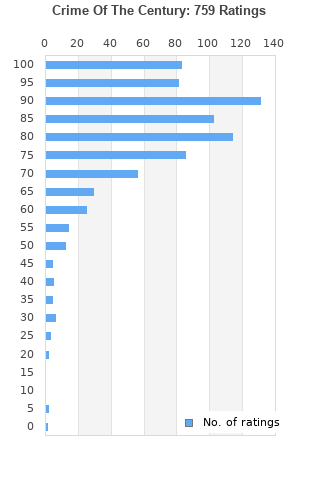 Crime Of The Century is ranked as the best album by Supertramp. 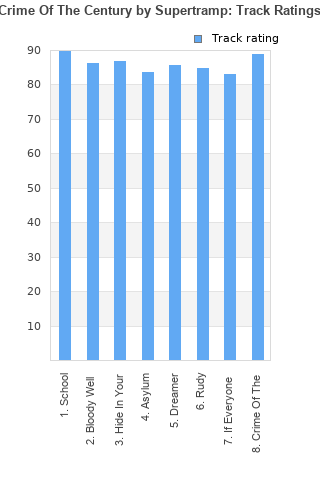 Crime Of The Century rankings

Crime Of The Century collection

Crime Of The Century ratings

Rating metrics: Outliers can be removed when calculating a mean average to dampen the effects of ratings outside the normal distribution. This figure is provided as the trimmed mean. A high standard deviation can be legitimate, but can sometimes indicate 'gaming' is occurring. Consider a simplified example* of an item receiving ratings of 100, 50, & 0. The mean average rating would be 50. However, ratings of 55, 50 & 45 could also result in the same average. The second average might be more trusted because there is more consensus around a particular rating (a lower deviation).
(*In practice, some albums can have several thousand ratings)
This album is rated in the top 1% of all albums on BestEverAlbums.com. This album has a Bayesian average rating of 82.2/100, a mean average of 81.0/100, and a trimmed mean (excluding outliers) of 82.3/100. The standard deviation for this album is 15.2.

Crime Of The Century favourites

Crime Of The Century comments

I never heard of this album before, but I see it as an underrated masterpiece. Great instrumentation throughout all the tracks, and the only song that I don't like at all is Dreamer, but on the other hand Hide In Your Shell is one of the best 70s songs I've ever heard.

This is a great album. Lived off their Greatest Hits for years before finally getting round to the start of their albums - look forward to even more

I have never heard a single song from this band and looking forward to liking it?. The first tracks sound great.
A decent mixture of pop, rock, and prog is difficult to achieve without going too deep, nd make it a mess.

Supertramp is one of the best bands from the 70's. Starting with this album, they brought us joy with great music. Great compositions, so well played, truly awesome.

The best Supertramp record: great prog rock with complex songs, great diversity of instruments and it emotionally connects with me. Criminally underrated masterpiece !

Standouts: School, Hide in Your Shell, Rudy, Crime of the Century

Your feedback for Crime Of The Century