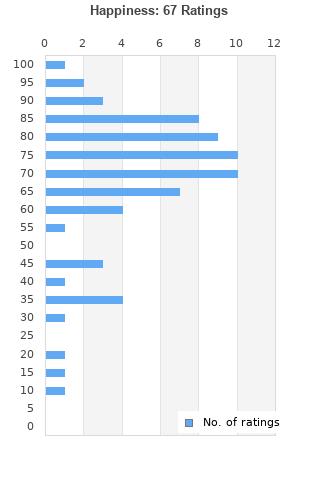 HAPPY ACCIDENT HURT BUTTONS RARE INDI EROCK CD SEALED NEW
Condition: Brand New
Time left: 18h 46m 49s
Ships to: Worldwide
$6.00
Go to store
Product prices and availability are accurate as of the date indicated and are subject to change. Any price and availability information displayed on the linked website at the time of purchase will apply to the purchase of this product.  See full search results on eBay

Happiness is ranked as the best album by Hurts. 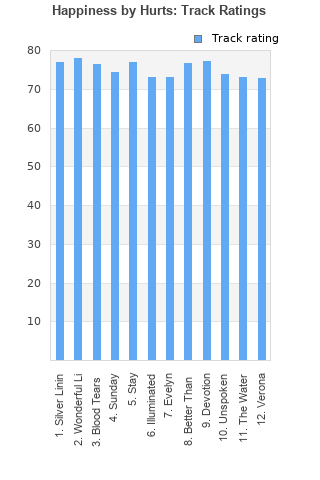 Rating metrics: Outliers can be removed when calculating a mean average to dampen the effects of ratings outside the normal distribution. This figure is provided as the trimmed mean. A high standard deviation can be legitimate, but can sometimes indicate 'gaming' is occurring. Consider a simplified example* of an item receiving ratings of 100, 50, & 0. The mean average rating would be 50. However, ratings of 55, 50 & 45 could also result in the same average. The second average might be more trusted because there is more consensus around a particular rating (a lower deviation).
(*In practice, some albums can have several thousand ratings)
This album has a mean average rating of 67.0/100. The trimmed mean (excluding outliers) is 67.2/100. The standard deviation for this album is 20.3.

Bery nice pop! Atmospheric, simple and made to evoke vanity and the inevitable urging for the escaping youth and beauty.

Brilliant debut album from a great live band. They have got the look, the sound and they deserve success.

It never fails to amuse me how Hurts manage to bring out the rock-bore in certain circles - you know the type "I like meat and two veg authentic guitar rock music none of this poncey farting around with synthsiser queer shit" The sort of people who like the Human League or the Pet Shop Boys now but couldn't stomach them at the time cos they were too much of a threat. Luddites in other words.
Hurts are everything that every great pop band has been or will be i.e. great songs with a good line in subversion, killer looks, and the wherewithal to acknowledge that you don't have to be Throbbing Gristle in order to be innovative. Put simply, Happiness is Pop Music at it's best and it is the biz.

Your feedback for Happiness