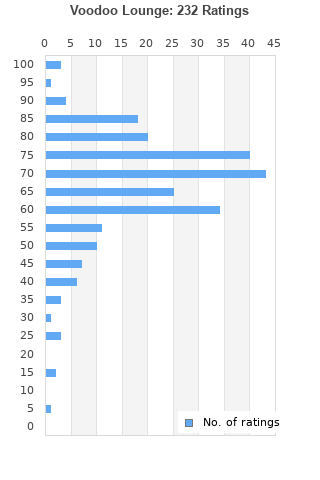 Voodoo Lounge is ranked 19th best out of 94 albums by The Rolling Stones on BestEverAlbums.com.

The best album by The Rolling Stones is Exile On Main St. which is ranked number 43 in the list of all-time albums with a total rank score of 26,911. 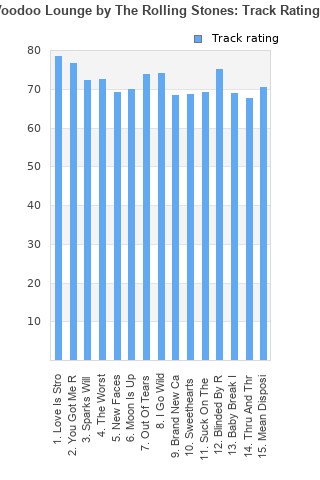 Rating metrics: Outliers can be removed when calculating a mean average to dampen the effects of ratings outside the normal distribution. This figure is provided as the trimmed mean. A high standard deviation can be legitimate, but can sometimes indicate 'gaming' is occurring. Consider a simplified example* of an item receiving ratings of 100, 50, & 0. The mean average rating would be 50. However, ratings of 55, 50 & 45 could also result in the same average. The second average might be more trusted because there is more consensus around a particular rating (a lower deviation).
(*In practice, some albums can have several thousand ratings)
This album has a Bayesian average rating of 67.7/100, a mean average of 66.7/100, and a trimmed mean (excluding outliers) of 67.4/100. The standard deviation for this album is 14.9.

A few highlights, but overshadowed by a plethora of garbage.

Quite a slog to get through. The only stand out to me is "I go wild"

Nothing here was notable, painfully average.

Would be a decent album without 'New Faces', 'Moon is up', 'Brand New Car' and 'Sweethearts Together'. Padding albums out to CD length, mad idea.

This album helped cement the opinion that the real Stones were gone forever.

Listening to the demo tapes of voodoo lounge one can realize the best songs where probably meant for Keef&Mick's solo albums.
Keith rendition of Love is strong is better than Mick's (it wouldn't have been a hit song tho. The merit of that goes for Mick no questions).
Mick's uptempo Out of tears from the demo makes a far better song than the cheesy ballad from the record (that is saved by Ronnie's great slide solo).
There are a couple of tracks worth listening but really this is packed with fillers. The lenght doesn't help too. It's hard to sit and listen to an hour of this. Could've been better as a 9 or 10 tracks 40min album.

It was a five year gap between this and their last album, steel wheels, the longest in their career so far. Was it worth the wait? Not really. This is an album lacking ideas and direction. The first two tracks, love is strong and you got me rocking are ok, but they're obviously a desperate attempt to re-produce the classic stones sound. Elsewhere, there are some ok tracks, the lovely new faces and the ballad out of tears. Keith's, the worst is also rather lovely. Unfortunately, there are also some real duds. Brand new car is awful, probably the worst song the stones have ever done, and moon is up is a tuneless mess with ridiculously loud drums. The fact that there's nothing great on here is made worse by the fact that the album is so long, a product of the CD age. The best you can say about this album is that it's better than dirty work, the worst, it's no better than any other stones album.

The edge is gone fellas.

Your feedback for Voodoo Lounge