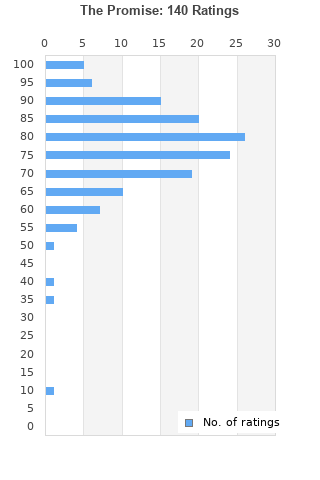 Bruce Springsteen The Promise 3xLP sealed 180 gm vinyl
Condition: New
Time left: 2d 2h 8m 26s
Ships to: Worldwide
$64.98
Go to store
Product prices and availability are accurate as of the date indicated and are subject to change. Any price and availability information displayed on the linked website at the time of purchase will apply to the purchase of this product.  See full search results on eBay

The Promise is ranked 15th best out of 122 albums by Bruce Springsteen on BestEverAlbums.com.

The best album by Bruce Springsteen is Born To Run which is ranked number 66 in the list of all-time albums with a total rank score of 21,810. 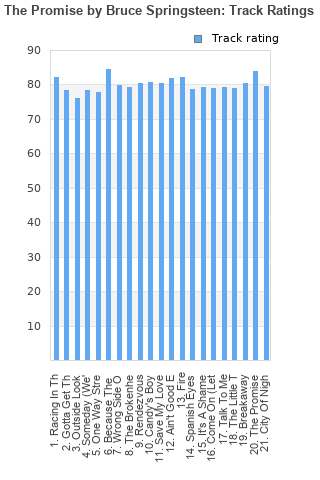 Rating metrics: Outliers can be removed when calculating a mean average to dampen the effects of ratings outside the normal distribution. This figure is provided as the trimmed mean. A high standard deviation can be legitimate, but can sometimes indicate 'gaming' is occurring. Consider a simplified example* of an item receiving ratings of 100, 50, & 0. The mean average rating would be 50. However, ratings of 55, 50 & 45 could also result in the same average. The second average might be more trusted because there is more consensus around a particular rating (a lower deviation).
(*In practice, some albums can have several thousand ratings)
This album is rated in the top 4% of all albums on BestEverAlbums.com. This album has a Bayesian average rating of 77.8/100, a mean average of 77.3/100, and a trimmed mean (excluding outliers) of 78.1/100. The standard deviation for this album is 13.0.

The promise, could be called, lightness on the edge of town. Consisting of tracks recorded at the sessions for, darkness on the edge of town, you can see why these tracks didn't make it on to the final album, they're too light, throwaway even. Some tracks though, are superb. I find the version of, racing in the street, superior to the one on, darkness, although I do concede that the one that did end up on that LP, is the correct decision, the version here wouldn't have felt right. Elsewhere there are finally studio version's of, because the night, and, fire. There are a lot of songs that are earlier incarnations of later tracks, featuring lyrics that were later to be found on other songs. There are some fun songs in, I gotta get that feeling, and, rendezvous. Some people on this website seem to think that these songs are 'rejects', they are not 'rejects', they are songs that weren't right for, darkness, Springsteen wanted to make a moody album, so most of these songs wouldn't have felt or sounded right, that's why they were left off, they are certainly not 'rejects'. Having said that at least one of those tracks should have replaced the weak, factory, which is the one song that lets, darkness, down. Either way, all in all, the promise, is another piece of the, darkness, puzzle, but it's also an album in it's own right.

I'm not a fan of late-'70s Springsteen, but I like some of this better than what landed on the albums of that era.

Considering that these are by and large rejects you have to say (as so often), wow, what an artist.

It is a strong album but a few songs should not hev been sung by Bruce. Even if he wants to sing like Roy Orbison he can´t sing Someday. A pity that my favourite cut of the song The Promise isn´t here.

This album should be much higher on the Bruce Springsteen list!!! Much Much Much higher! This album is pretty good especially for a B-sides album.

Very good album, especially when you consider these were the scraps that did not get their own album in the 70s.

Not the best thing in the world on first listen but I have a strong feeling this album will take a lot of time. It is probably full of gems that need more than one listen. Have my copy ready for further listen.

Your feedback for The Promise