Hypnotize (studio album) by System Of A Down 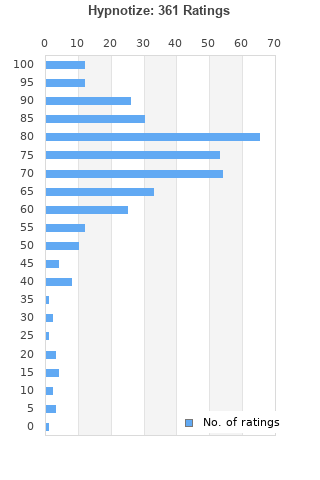 SYSTEM OF A DOWN CD Hypnotize Mezmerize AMERICAN/COLUMBIA Free Shipping
Condition: Like New
$9.48

Hypnotize is ranked 4th best out of 5 albums by System Of A Down on BestEverAlbums.com.

The best album by System Of A Down is Toxicity which is ranked number 308 in the list of all-time albums with a total rank score of 6,169.

Nola (Tribute to Down), Lost In Hollywood (System Of A Down Tribute), Sandblasted Skin (Pantera Tribute)
The Forge, Joliet, United States. 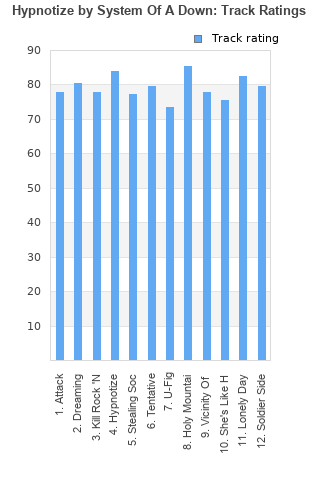 Rating metrics: Outliers can be removed when calculating a mean average to dampen the effects of ratings outside the normal distribution. This figure is provided as the trimmed mean. A high standard deviation can be legitimate, but can sometimes indicate 'gaming' is occurring. Consider a simplified example* of an item receiving ratings of 100, 50, & 0. The mean average rating would be 50. However, ratings of 55, 50 & 45 could also result in the same average. The second average might be more trusted because there is more consensus around a particular rating (a lower deviation).
(*In practice, some albums can have several thousand ratings)
This album has a Bayesian average rating of 73.1/100, a mean average of 71.2/100, and a trimmed mean (excluding outliers) of 73.1/100. The standard deviation for this album is 17.9.

More brilliance from SOAD. My favourites are Hypnotize, Holy Mountains and Tentative.

I love this album. More melody in a lot of the songs compared to Toxicity. Just kept getting better the more I listened. Standout tracks: Hypnotize, Tentative, Holy Mountains, Lonely Day.

Not a bad album, but this is easily their weakest. Song writing is just childish here, and doesn't have the seriousness of their previous albums to counter the humor, like Toxicity did perfectly.

This was such a fun, but heavy and cool album to listen to. Hard to explain at times but so good. This is the 2nd SOAD album I've listened to after Toxicity and I'm not disappointed by this one. Some travks were a little weird for me... But the first like 4 were excellent and the best. Each song is well crafted and so unique. Love these guys.

My favourite album by my favourite metal band. I love the sound that is crafted on Hypnotize. Serj Tankien uses his voice as an instrument so well using pitch and melodies and sounds. Malakian's songwriting stands out. I prefer his style to what was written on albums prior. The aggression and dynamic changes make this album unique and fun to listen to.

Good, but it seems to be composed of the scraps of mezmerize. If they had published one album with the best of the two, it would have been a fantastic one.

System of a Down is my favorite band. This album, their last before hiatus, is the 2nd part to the Hypnotize/Mezmerize 2-CD set. A little faster-paced than Mezmerize, it has some amazing tracks, and the more you listen to it, the deeper it becomes.

This album kicks your ass! Great guitar work. A great follow up to mezmorize. If you don't like these albums go eat a bag of dicks...

SOAD's latest has plenty to offer. Pop meets thrash metal in the storming opener 'Attack'. HWile the rest of this album gives us a rich variety of ethnically tinged metal.

Your feedback for Hypnotize