Toxicity (studio album) by System Of A Down 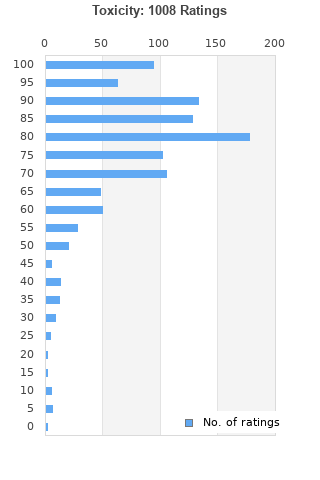 Toxicity is ranked as the best album by System Of A Down.

be gay [crash the system]
The Funhouse at Mr. Smalls, Millvale, United States. 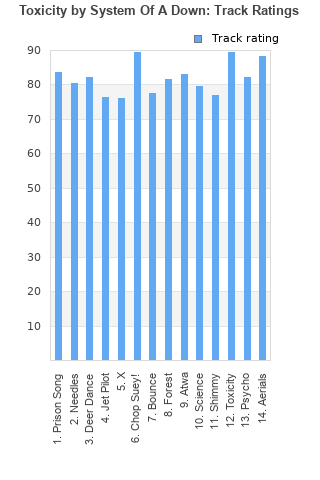 Rating metrics: Outliers can be removed when calculating a mean average to dampen the effects of ratings outside the normal distribution. This figure is provided as the trimmed mean. A high standard deviation can be legitimate, but can sometimes indicate 'gaming' is occurring. Consider a simplified example* of an item receiving ratings of 100, 50, & 0. The mean average rating would be 50. However, ratings of 55, 50 & 45 could also result in the same average. The second average might be more trusted because there is more consensus around a particular rating (a lower deviation).
(*In practice, some albums can have several thousand ratings)
This album is rated in the top 3% of all albums on BestEverAlbums.com. This album has a Bayesian average rating of 78.1/100, a mean average of 76.9/100, and a trimmed mean (excluding outliers) of 78.1/100. The standard deviation for this album is 17.6.

Such a consistent album. All of the songs are memorable. They are such a unique band, and this is their best work. The singles are obviously great (Chop Suey, Toxicity and Aerials), but Science is probably my favourite track on the album. Atwa and Needles are underrated too.

This is a fantastic record that is extremely unique and different to anything else I have heard. The lyrics are brilliant and are delivered with such power and emotion that you start to feel connected to the artist. Musically, it is stunning as well with the guitar sounding thick and it completely controls the album. Almost every song is a banger and so you hardly get a minute to rest on this album. A few songs do falter a little and don't have the same feel as the other tracks though. Overall, a great album that is well worth a listen.

This is the album that set SOAD apart from the others with them finding there unique style. They have a sound unlike anyone else. 'Science' & 'Toxicity' being my standout track picks.
With this followed by 'Hypnotize' & 'Mezmerize' they rightly deserve there place among the Metal elite.

Very powerful stuff in terms of both music and lyrics, not to mention the excellent vocals. Two reason I don't rank this higher: first, I found the melodies in "Mesmerize/Hypnotize" more enjoyable, second, some of the songs here were kind of repetitve and forgetable, they didn't bring anything new to the table. Overall, 70/100.

Once I began to embrace what this band had to offer, I fell right in. This record especially, in large part thanks to the unbelievable flow, terrific production, and gripping performances. The dueling nightmarish vocals, erratic guitar, and often times brutally honest message make this a record that demands attention and deserves it.

I understand this band isn't for everyone, but my love for this record, this band, and what this record represents in rooted deep inside me.

First listen: Wtf is this?
Second listen: Ok some of these songs actually slap
Third listen and beyond: WAKE UP! GRABABRUSHSHOULDPUTALITTLEMAKEUP!!!

Great politically charged lyrics, a real blast from the past

I've listened to these songs from this album so many times and it is with great honour that I say this is the best album I have listened to (within the last few months or so). There isn't a song I dislike from this album because from start to finish, it is fantastic (I never get tired of listening to Chop Suey, Toxicity, Aerials, etc). I mean, who doesn't like this album? no one! This is just beyond brilliant, I do also enjoy System of a Down's earlier and later albums as well but this? This is just amazing.

Your feedback for Toxicity