Mezmerize (studio album) by System Of A Down 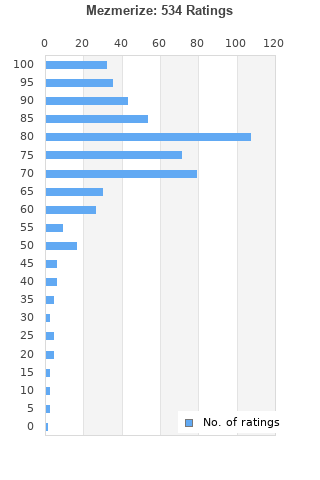 Mezmerize is ranked 2nd best out of 5 albums by System Of A Down on BestEverAlbums.com.

The best album by System Of A Down is Toxicity which is ranked number 307 in the list of all-time albums with a total rank score of 6,184.

Nola (Tribute to Down), Lost In Hollywood (System Of A Down Tribute), Sandblasted Skin (Pantera Tribute)
The Forge, Joliet, United States. 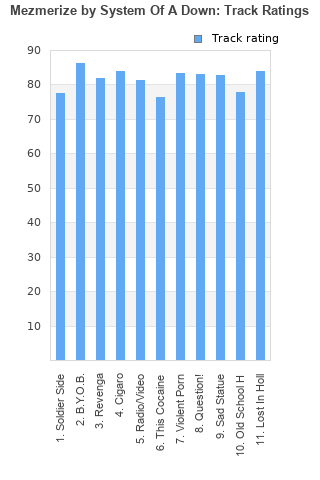 Rating metrics: Outliers can be removed when calculating a mean average to dampen the effects of ratings outside the normal distribution. This figure is provided as the trimmed mean. A high standard deviation can be legitimate, but can sometimes indicate 'gaming' is occurring. Consider a simplified example* of an item receiving ratings of 100, 50, & 0. The mean average rating would be 50. However, ratings of 55, 50 & 45 could also result in the same average. The second average might be more trusted because there is more consensus around a particular rating (a lower deviation).
(*In practice, some albums can have several thousand ratings)
This album is rated in the top 7% of all albums on BestEverAlbums.com. This album has a Bayesian average rating of 76.3/100, a mean average of 75.0/100, and a trimmed mean (excluding outliers) of 76.4/100. The standard deviation for this album is 17.0.

The only album I've ever heard with absolutely no filler, I would choose to listen to any song in this album individually.

-B.Y.O.B. (of course)
-Question!
-This Cocaine Makes Me Feel Like I'm On This Song
-Sad Statue

Very consistent album, but lacks the quality tracks that Toxicity has. Highlights are BYOB, Question, This Cocaine. Can't help but get a kick out of Cigaro too.

Their sound in this album is all over the map, but in a good way. They are balancing between their typical aggressive style, a softer, melodic ballad-ish side and some weird stuff that may seem over the top (but why would you like SOAD if you don't like weird). In terms of lyrics they combine social-political criticism with their unique sense of humor. This is my favorite album by them. Overall, 80/100.

Riffs. Rhythm. Melody. These guys are king of it all. There's no one that sounds even remotely like them. Totally unique. Every album they've put out is full of great tracks and this is no exception.

Another awesome SOAD work here. I didn't like it as well as Tox or Hypnotize, but still really enjoyed it. Such a unique, heavey, and all around awesome sound. Favorite track was probably Old School Hollywood. Just had some charm about it.

Very solid album top to bottom. Some lyrics are forgettable though.

Similarly to Hypnotize, I love how Tankien uses his voice. Combined with Malakian's great songwriting, this album is everything you want from System of a Down. B.Y.O.B. stands strong as one of their best, as does Violent Pornography. There are some filler tracks, but no tracks that I skip on every listen. As a whole it is a good listen.

This is my favourite System of a Down album. It is their most consistent. There's not a single song on this album that I would skip, I love all of them. Every song is fantastic. Malakian took on a more prominent writing role with Mezmerize, and personally I prefer his writing style. It's highly unique and creative. The music is powerful in many ways and executed fluidly and brilliantly.

Malakian and Tankien's vocals compliment each other perfectly to create a beautiful and mad noise. Screams and harmonies are the strengths here. System of a Down show their technical prowess and the result is awesome. I love listening to this album, and it's one of the few that I can listen to start to finish and enjoy every single song.

It might not be the best S.O.A.D album but it's still up there.

Very good album from SOAD. I like its variety, from hard pieces to ballads, passing through songs like Radio-Video. Nice work.