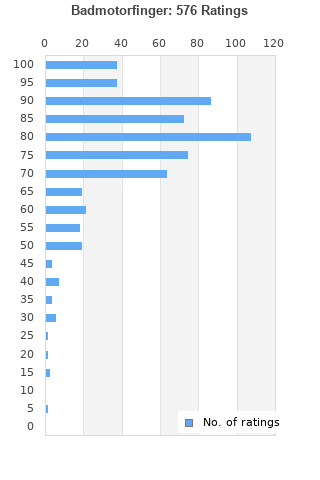 Badmotorfinger is ranked 2nd best out of 14 albums by Soundgarden on BestEverAlbums.com.

The best album by Soundgarden is Superunknown which is ranked number 189 in the list of all-time albums with a total rank score of 9,399. 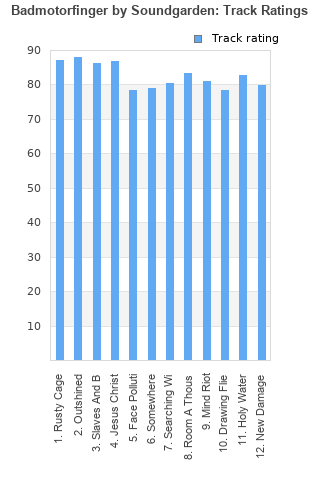 Rating metrics: Outliers can be removed when calculating a mean average to dampen the effects of ratings outside the normal distribution. This figure is provided as the trimmed mean. A high standard deviation can be legitimate, but can sometimes indicate 'gaming' is occurring. Consider a simplified example* of an item receiving ratings of 100, 50, & 0. The mean average rating would be 50. However, ratings of 55, 50 & 45 could also result in the same average. The second average might be more trusted because there is more consensus around a particular rating (a lower deviation).
(*In practice, some albums can have several thousand ratings)
This album is rated in the top 3% of all albums on BestEverAlbums.com. This album has a Bayesian average rating of 78.4/100, a mean average of 77.7/100, and a trimmed mean (excluding outliers) of 78.5/100. The standard deviation for this album is 14.8.

All time favorite. It's got riffs and memorable songs.

I like this one, sometimes more tha Superunknown 'cause more nervous and harsh, like the voice of Cornell on this.Less "organic" than Superunknown but very good songs anyway, hypnotic and hard.

So great. This and Temple of the Dog are probably the best vocal performances on any albums ever. RIP

Soundgarden was a big part of the soundtrack to my high school years. Tracks 1-4 are the standout tracks, but there are other ones which are under appreciated like new damage and holy water. Slaves and Bulldozers may be the best vocal performance Chris ever gave. RIP Chris Cornell

Not as good as Superunknown, but still very solid and grungy album, that brings out very good stuff.

A good album, although it does sound a little dated listening to it in 2017. I used to love Chris Cornell's voice but it sounds a bit over the top now. Still it's enjoyable enough, if a little overlong, with, Jesus Christ pose, the standout track. Superunknown,though, would be much better.

Your feedback for Badmotorfinger