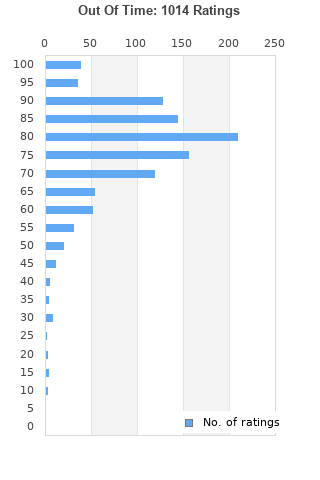 R.E.M. Out Of Time 25th Anniversary Edition 3LP Reissue 2016
Condition: Used
Time left: 3h 13m 29s
Ships to: Worldwide
$75.00
Go to store
Product prices and availability are accurate as of the date indicated and are subject to change. Any price and availability information displayed on the linked website at the time of purchase will apply to the purchase of this product.  See full search results on eBay

Out Of Time is ranked 4th best out of 33 albums by R.E.M. on BestEverAlbums.com.

The best album by R.E.M. is Automatic For The People which is ranked number 57 in the list of all-time albums with a total rank score of 23,261.

Get the Led Out
Concerts on the Green at Suneagles , Eatontown, United States. 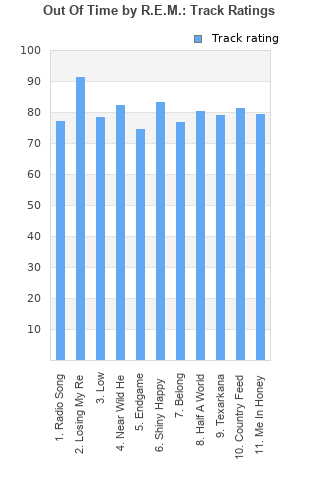 Out Of Time rankings

Out Of Time collection

Out Of Time ratings

Rating metrics: Outliers can be removed when calculating a mean average to dampen the effects of ratings outside the normal distribution. This figure is provided as the trimmed mean. A high standard deviation can be legitimate, but can sometimes indicate 'gaming' is occurring. Consider a simplified example* of an item receiving ratings of 100, 50, & 0. The mean average rating would be 50. However, ratings of 55, 50 & 45 could also result in the same average. The second average might be more trusted because there is more consensus around a particular rating (a lower deviation).
(*In practice, some albums can have several thousand ratings)
This album is rated in the top 4% of all albums on BestEverAlbums.com. This album has a Bayesian average rating of 77.5/100, a mean average of 76.5/100, and a trimmed mean (excluding outliers) of 77.5/100. The standard deviation for this album is 13.7.

Out Of Time favourites

Out Of Time comments

Its is their best selling record, which is no superise because the music very catchy along with the lyrics on the bulk of the songs.I like all of the songs .

In my top 20 albums of all time. REM got popular, for good reason.

Some very good moments, the rest is bang average for a band of this calibre.

What to make of Out Of Time? As an R.E.M mega fan I’ve grappled with this question for 25 years & TBH I still don’t know & may never fully understand. The 1st 4 songs in Radio Song , Loosing My Religion, Low and Near Wild Heaven are average to say the least before Endgame , Shiny Happy People ( yes I love this song even though the band doesn’t) Belong and Half A World Away ( am I the only one who thinks their unplugged version is better than the album version? ) stops the rot and resumes regular transmission . Texacarna is a misplaced inclusion & should have been a B Side . Then we close with the magestic Country Feedback Song with may well be the best R.E.M track period leaving me breathless to this day and incredible Me In Honey. All up it’s a real mixed bag of The Good, The Bad and The Kinda OK . I’ll be listening to the 25th Anniversary Edition wire to wire as per every 25 year release but I recon I’ll be skipping a few tracks to get to the good ones

Favoritas: Losing My Religion, Me In Honey, Near Wild Heaven, Country Feedback

The album that catapulted REM to superstardom. Out of time, is a warm, sunny record, the band's ultimate Americana moment. It's a rich collection of sounds though predominantly acoustic based. Radio song, kicks the album of in superb fashion, followed by, losing my religion, without a doubt, one of REM's greatest songs, and one of the best tracks of the nineties. Low, is a brooding epic, with, near wild heaven, following, one of their most summery moments. End game, is a pleasant enough semi-instrumental. Shiny happy people, has always been controversial among REM fans, personally, I think it's a lovely little pop song, harmless fun. Belong, is interesting, and, half a world away, is excellent, my second favourite track on the album after, religion. Texarkana, is great, and that's followed by the atmospheric, country feedback. Brilliant. Me in honey, ends the record on a high note. Out if time, is a consistently satisfying album, one of their best.

Your feedback for Out Of Time