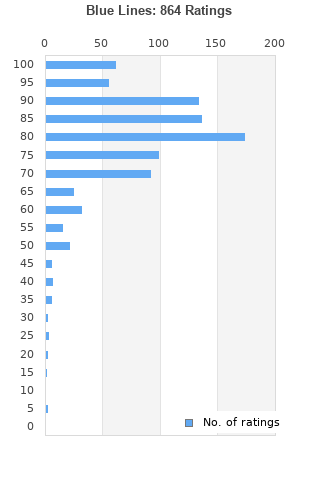 Blue Lines is ranked 2nd best out of 9 albums by Massive Attack on BestEverAlbums.com.

The best album by Massive Attack is Mezzanine which is ranked number 152 in the list of all-time albums with a total rank score of 11,221. 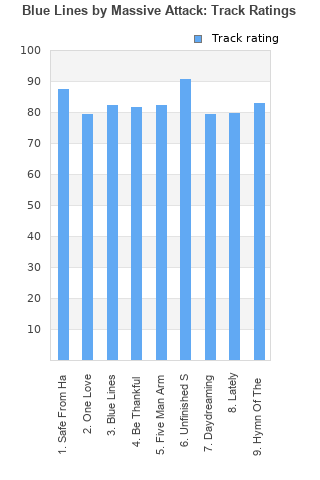 Rating metrics: Outliers can be removed when calculating a mean average to dampen the effects of ratings outside the normal distribution. This figure is provided as the trimmed mean. A high standard deviation can be legitimate, but can sometimes indicate 'gaming' is occurring. Consider a simplified example* of an item receiving ratings of 100, 50, & 0. The mean average rating would be 50. However, ratings of 55, 50 & 45 could also result in the same average. The second average might be more trusted because there is more consensus around a particular rating (a lower deviation).
(*In practice, some albums can have several thousand ratings)
This album is rated in the top 2% of all albums on BestEverAlbums.com. This album has a Bayesian average rating of 80.3/100, a mean average of 79.4/100, and a trimmed mean (excluding outliers) of 80.4/100. The standard deviation for this album is 14.2.

Got a listen to this from 2019 - three outstanding tracks on a good solid album - Safe From Harm, Hymn Of The Big Wheel and the immense Unfished Sympathy. No bad tracks for me.

An amazing debut album. Such a unique sound, unparalleled in this genre. Unfinished Sympathy is one of my favourite songs of all time - even the band seemed surprised at how good it was judging by the lyrics at the end of the song - "Don't know where this one came from". I'm also a big fan of the title track. The rest of the album is solid.

Released in 1991, it wasn’t until the late 90s when I, as a 16 year old, snuck into pubs and bars with fake ID before stumbling on to the last bus home to be serenaded to sleep by Blue Lines. It used to be my preventative hangover cure and I am still convinced that I’ve never woken up with a sore head after listening to all 45:04 of this brilliance before bedtime.

Groundbreaking electronica from the Bristol collective. Unlike some pioneering work, however, this sounds great too. Covering jazz-fusion drumming and lovers rock all within the trip-hop parameters, this LP sounds better on every listen.
Rating: Excellent
Best track: Hymn Of The Big Wheel

THE BEST START FOR A BAND

Overall more mellow than I go for, but relatively listenable.

Not the biggest trip hop fan. It sounds too much like smooth jazz is sucking the fun and energy out of hip hop, but this is undeniably a good, interesting, and ground breaking record.

Your feedback for Blue Lines