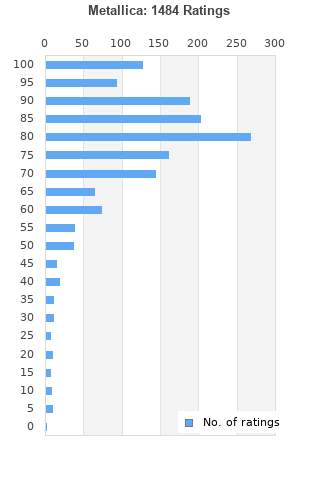 Metallica is ranked 3rd best out of 23 albums by Metallica on BestEverAlbums.com.

The best album by Metallica is Master Of Puppets which is ranked number 108 in the list of all-time albums with a total rank score of 14,329.

ONE... The ONLY Tribute to Metallica
Emerald Theatre, Mount Clemens, United States. 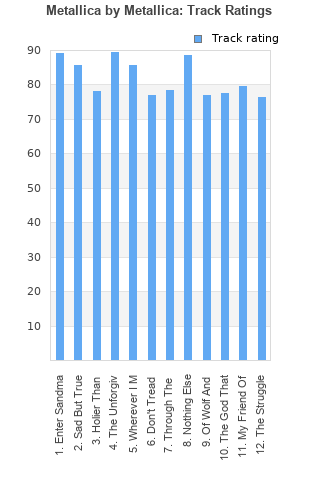 Nothing Else Matters
Rating: 89 (397 votes)Comments:

Rating metrics: Outliers can be removed when calculating a mean average to dampen the effects of ratings outside the normal distribution. This figure is provided as the trimmed mean. A high standard deviation can be legitimate, but can sometimes indicate 'gaming' is occurring. Consider a simplified example* of an item receiving ratings of 100, 50, & 0. The mean average rating would be 50. However, ratings of 55, 50 & 45 could also result in the same average. The second average might be more trusted because there is more consensus around a particular rating (a lower deviation).
(*In practice, some albums can have several thousand ratings)
This album is rated in the top 3% of all albums on BestEverAlbums.com. This album has a Bayesian average rating of 78.0/100, a mean average of 76.5/100, and a trimmed mean (excluding outliers) of 78.0/100. The standard deviation for this album is 17.9.

There are some real highlights on this album (Enter Sandman, Sad But True, Nothing Else Matters), but as an album I didn't like it. Too long and too many similar tracks. I actually found it quite boring to listen to.

The perfect trash metal album and the most complete from Metallica. Every track is really good....

a perfect radio-metal album. It does have a host of flaws though

I was never sure if I liked Metallica but I like Diamond Head so thought I would give this, their most accessible offering a go. I like it, great riffery and guitar soloing in parts. 'Wherever I Roam' is a personal favourite with its Eastern influenced opening, heavy riff and blistering guitar soloing. I don't think I will head further into the Metallica catalogue as I am not a lover of all out thrash metal which I understand is what their core output has been. Good on Bill Bailey getting Enter Sandman an airing on Strictly!

Feels a little full of itself at times, but it's hard to deny the enormity of the singles.

Their most accessible and enjoyable album for someone not quite into metal. I understand that this came as a disappointment for a significant portion of their fans, but you have to appreciate their willingness to broaden their musical horizons. Sadly, their last great album. Overall, 85/100.

So much debate over this album within the 'true metal community' on the merit of it. It became commercial, it introduced a whole new audience to metal, it wasn't as ferocious as there previous work. So because Metallica seemed to of sold out, the hardcore metallers dismissed it. But this is a stone cold great hard rock/metal album. All killer, no filler. Some of the tracks are up there with the best they've done. Worthy of it's place in history, the metal album that woke the musical drones up

Your feedback for Metallica