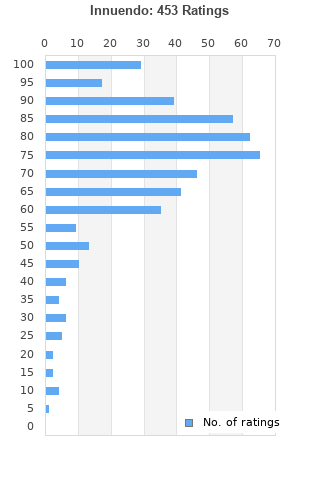 Queen - Innuendo / Bijou 7' Vinyl Single Record 1991 Queen 16 Emi
Condition: Used
Time left: 9h 5m 6s
Ships to: Worldwide
£9.99
Go to store
Product prices and availability are accurate as of the date indicated and are subject to change. Any price and availability information displayed on the linked website at the time of purchase will apply to the purchase of this product.  See full search results on eBay

Innuendo is ranked 6th best out of 47 albums by Queen on BestEverAlbums.com.

The best album by Queen is A Night At The Opera which is ranked number 92 in the list of all-time albums with a total rank score of 17,015. 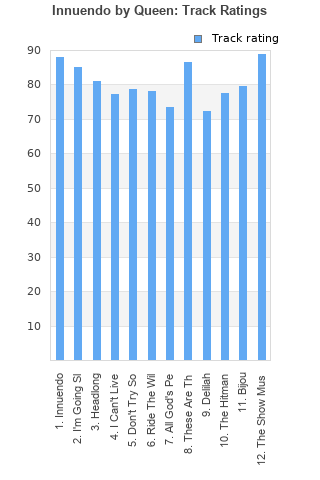 Rating metrics: Outliers can be removed when calculating a mean average to dampen the effects of ratings outside the normal distribution. This figure is provided as the trimmed mean. A high standard deviation can be legitimate, but can sometimes indicate 'gaming' is occurring. Consider a simplified example* of an item receiving ratings of 100, 50, & 0. The mean average rating would be 50. However, ratings of 55, 50 & 45 could also result in the same average. The second average might be more trusted because there is more consensus around a particular rating (a lower deviation).
(*In practice, some albums can have several thousand ratings)
This album has a Bayesian average rating of 73.5/100, a mean average of 72.6/100, and a trimmed mean (excluding outliers) of 73.6/100. The standard deviation for this album is 18.2.

This is their best album. Perfect in every way.

This album is phenomenal! Some of

I'm new to this album, though I've probably heard the rest of theirs when I was lots younger. Hmm, not sure what to make of this. It probably fits the regular queen formula of few singles standing out, few other good tracks and some duds. It does feel like one of their of their more coherent albums though. Mercury does sound lots different here, not bad, seems to be a lot higher. I am finding it hard to get through the production though, which I really don't like at all and is very off putting. That's a shame as they massively upped their game from the last album with some strong material. Where their best albums sound like a band playing, this sounds very much like it was constructed in the studio with session guys on rhythm section. Still, when's it's good, it really is and any amount of sterile pop rock over production can't spoil the highs.

I think Queen are excellent but I don't quite like this album although Days Of Our Lives and Show Must Go On are defo stand out tracks here. Innuendo track, I'm Going Slightly Mad, Don't Try So Hard and Bijou get pass marks but the rest is pretty weak, especially for such a top band

When I was younger this was my favourite Queen album. It still ranks very high and represents a majestic farewell from Freddie. His voice sounds thinner due to illnes but still very powerful and able to hit some glorious notes.
The tittle track, Days of Our Lives and The Show Must Go On are some of the greatest Queen songs ever.

Even more than The Miracle, Innuendo is a reinstatement of the grandiose Queen of old; instead of comparing the group unfavourably to their seventies triumphs it’s now a case of them creating new benchmarks. ‘Hitman’ isn’t their best rocker they’ve ever done, but it’s arguably the heaviest. ‘The Show Must Go On’ might be the most emotionally powerful song in their entire catalogue. The title track isn’t as self-consciously epic as ‘Bohemian Rhapsody’ or ‘The Prophet’s Song’, but the group have never sounded so effortlessly huge and majestic.

Favoritas: These Are The Days Of Our Lives, Innuendo, The Show Must Go On

Tracks' quality are uneven as in every Queen album but what is really outstanding is Freddie's performance in Show must go on. If the reader haven't done it I suggest him/she to listen to the vocal isolated track on YT. Hats off.

Queen's proper final album. It's certainly got better tunes than the previous two albums but it's also got a bit of filler on it. It's certainly queen's darkest album, probably due to Freddie's situation. Like most latter day queen records the singles are the strongest tracks. Standouts are i'm going slightly mad, the show must go on and these are the days of our lives. Praise also for the title track, ride the wild wind and bijou. Delilah is awful, probably queen's worst song, and don't try so hard is just a poor re-write of who wants to live forever. My other problem with the album is Freddie's voice. I know he's not well but his vocals are really high pitched and annoying. It really grates on some tracks. Still, it's one of their strongest from their later years.

Your feedback for Innuendo