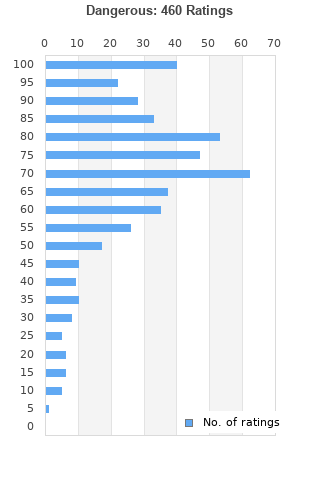 Dangerous is ranked 4th best out of 24 albums by Michael Jackson on BestEverAlbums.com.

The best album by Michael Jackson is Thriller which is ranked number 82 in the list of all-time albums with a total rank score of 18,048. 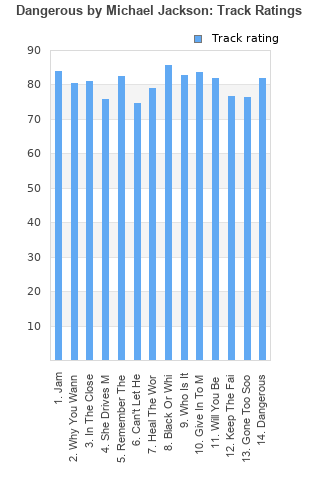 Rating metrics: Outliers can be removed when calculating a mean average to dampen the effects of ratings outside the normal distribution. This figure is provided as the trimmed mean. A high standard deviation can be legitimate, but can sometimes indicate 'gaming' is occurring. Consider a simplified example* of an item receiving ratings of 100, 50, & 0. The mean average rating would be 50. However, ratings of 55, 50 & 45 could also result in the same average. The second average might be more trusted because there is more consensus around a particular rating (a lower deviation).
(*In practice, some albums can have several thousand ratings)
This album has a Bayesian average rating of 70.0/100, a mean average of 69.8/100, and a trimmed mean (excluding outliers) of 69.9/100. The standard deviation for this album is 20.8.

A big drop-off in overall quality from Bad and Thriller. The album is too long, some of the songs should be half the length they are. I found it quite an arduous listen. But of course because it's Michael Jackson there are still some great tracks - my highlights are Black Or White, Give In To Me and Gone Too Soon.

However it’s a long album, some songs like Why You Wanna Trip On Me, In The Closet, Can’t Let Her Get Away and Keep the Faith are too long in my opinion.
It’s the first album where MJ seems less confident with himself with some dark songs like Who Is It and Will You Be There.
It came out in November 1991 when the Grunge exploded all over the world. Unfortunately that’s probably why many music critics don’t consider it as a classic like Off The Wall, Thriller and Bad.
I feel like Dangerous is more considered as a classic outside United States.
This is the last consistant album of Michael Jackson.
9/10

4th best MJ album for me, the first half is OK but the Second is AWESOME, black or white, who is it , give in to me, will you be there , gone too soon and dangerous are all at least 9/10 songs

this is a really fun album to listen too, and not many hits but this is a cohesive solid album the production is not bogged down but upbeat

Some great production value here with some catchy songs and beats. It runs a bit long at 77 minutes, however.

I’m a much bigger fan of ‘90s MJ to be perfectly honest. It’s because the influence from hip hop that you can hear in the production, which makes the music overall a lot more aggressive. And that can be heard in the vocals too. Most satisfying moment: in “Who Is It” when he shouts “I can’t take it ‘cause I’m lonely”. That’s some soul that I didn’t hear on Thriller or Bad. But it’s not at the expense of the funk; rather it adds to it. The rapping itself though... but okay, that’s one bad decision.
The subjects are also a lot more personal with Michael addressing the media and how they deliberately distract people from real issues in the world to focus on him.
Overall this album just screams Michael Jackson the most.

While Black and White, Jam, Remember the Time and Will You Be There are the popular ones, I always find myself wanting to listen to songs like Give In to Me and In the Closet. Some of the lyrics are saccharine in the extreme but overall another solid album from MJ overall.

Why You Wanna Trip on Me is one of his best songs.

Your feedback for Dangerous