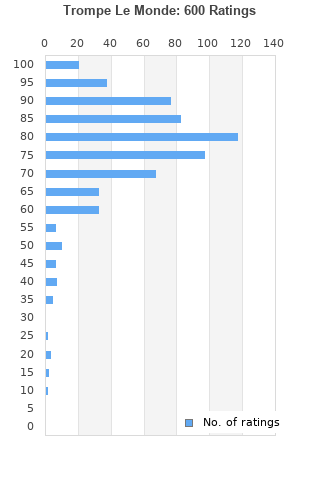 Trompe Le Monde is ranked 4th best out of 24 albums by Pixies on BestEverAlbums.com.

The best album by Pixies is Doolittle which is ranked number 19 in the list of all-time albums with a total rank score of 43,866. 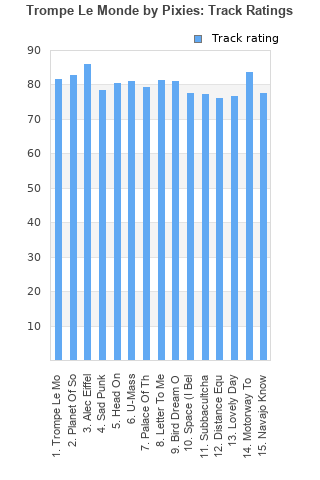 Rating metrics: Outliers can be removed when calculating a mean average to dampen the effects of ratings outside the normal distribution. This figure is provided as the trimmed mean. A high standard deviation can be legitimate, but can sometimes indicate 'gaming' is occurring. Consider a simplified example* of an item receiving ratings of 100, 50, & 0. The mean average rating would be 50. However, ratings of 55, 50 & 45 could also result in the same average. The second average might be more trusted because there is more consensus around a particular rating (a lower deviation).
(*In practice, some albums can have several thousand ratings)
This album is rated in the top 3% of all albums on BestEverAlbums.com. This album has a Bayesian average rating of 78.2/100, a mean average of 77.2/100, and a trimmed mean (excluding outliers) of 78.3/100. The standard deviation for this album is 14.0.

I’m a pretty big Pixies guy, hell ‘Surfer Rosa’ is the numero uno album on my all time list, but I’ve been harsh on ‘Trompe Le Monde’ over the years. Too harsh. And time has provided perspective as to why

(2) 1991 was a huge year for iconic albums with legendary releases from Primal Scream, Nirvana, MBV, R.E.M, Teenage Fanclub and Slint. ‘TLM’ simply got swallowed up

(3) Being a massive Jesus and Mary Chain fan I had a huge problem with “Head On’s” inclusion on ‘TLM’. Even today its not a great version but I’ve certainly mellowed

(4) Weaker tracks: initially I thought the albums weaker tracks (“Bird Dream of the Olympus”, “Distance Equal Rate”, “The Navajo Know”) were simply awful which completely blinded me to the amount of good on ‘TLM’

So Dear Pixies
I got this one wrong, please forgive me. We all make mistakes, and this has been a big one

For my money, way better than Bossanova. Much more explosive, every song is so good.

Okay, so it's not Doolittle, but very few albums are. It's not quite got the raw energy of Surfer Rosa either, but Space, Planet of Sound, Palace of the Brine, Bird Dream of the Olympus Mons and Motorway to Roswell are all Pixies classics.

Eccentric, though in no way surprising for Pixies. A good way to end their pre-grunge run in the late 80s, early 90s.

I find myself coming back to this album the most of all Pixies albums. This one sounds more modern, quirky and mature with an undercurrent of sadness throughout perhaps due to this being the last release for a long time.

A masterpiece... Pixies best album and possibly my favourite album ever

Despite a preference for their previous 3 albums, I enjoy the atmosphere and sound of this one. Not a great abundance of memorable tracks, I think this one is a grower (I personally need to listen to it more often!). However Kim Deal is key to this band for me, and her reduced contribution to this one inevitably has an effect.
I'd rather 4 distinct albums, where everyone has their own favourites, than 10 identical ones. This is, after all, why I love certain bands more than the rest - Pink Floyd, Radiohead etc as other examples.

Your feedback for Trompe Le Monde