Use Your Illusion II (studio album) by Guns N' Roses 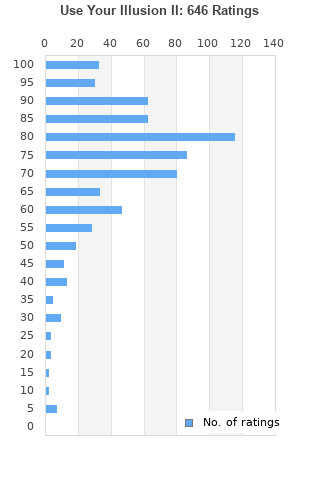 Use Your Illusion II is ranked 2nd best out of 9 albums by Guns N' Roses on BestEverAlbums.com.

The best album by Guns N' Roses is Appetite For Destruction which is ranked number 116 in the list of all-time albums with a total rank score of 14,027. 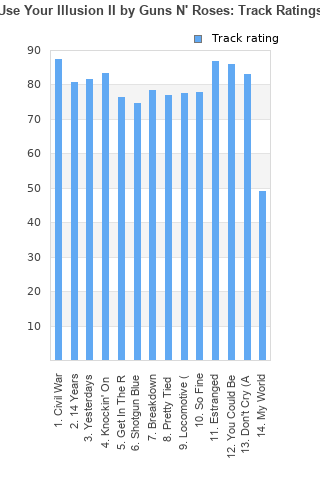 Use Your Illusion II rankings

Use Your Illusion II collection

Use Your Illusion II ratings

Rating metrics: Outliers can be removed when calculating a mean average to dampen the effects of ratings outside the normal distribution. This figure is provided as the trimmed mean. A high standard deviation can be legitimate, but can sometimes indicate 'gaming' is occurring. Consider a simplified example* of an item receiving ratings of 100, 50, & 0. The mean average rating would be 50. However, ratings of 55, 50 & 45 could also result in the same average. The second average might be more trusted because there is more consensus around a particular rating (a lower deviation).
(*In practice, some albums can have several thousand ratings)
This album has a Bayesian average rating of 74.0/100, a mean average of 72.7/100, and a trimmed mean (excluding outliers) of 74.1/100. The standard deviation for this album is 18.4.

Use Your Illusion II favourites

Use Your Illusion II comments

The better of the 2 records. Faint praise though.

I really don't understand this album at all. It starts off brilliantly with the opening track Civil War which really got me excited for the record and then after that it is just all downhill. I don't know why the album is an hour and 15 minutes as they really struggle to fill that run time. Every song lacks substance and most of them are filler cuts. They make it extremely difficult to find the good songs on the album but there are a couple but even they are too drawn out so you end up skipping the ending. There are also some tracks I would genuinely consider to be bad and really unenjoyable. Overall, this album is pretty poor and I have no desire to listen to it again.

Use Your Illusion I is much better in my opinion. This has a few good songs, but for the most part, all b-sides and throw aways.

Probably didn't help the album that Axl did a lot of talking in "Get in the Ring" and then allegedly couldn't/wouldn't back it up when Bob Guccione Jr. accepted the challenge. I mean if you're going to talk like that, even in song.....

out of the two use your illusions this one is my favorite, right off the bat Civil War is a killer track a modern day storytelling prog hard rock song, yesterdays is a great mid tempo ballad on and on this album is solid beginning to end

I don't see much filler here. 'You could be mine' and 'Estranged' are two of the best rock anthems of all time.

The issue that I have with the "Illusion" albums is the same problem I have with GNR albums in general: too much filler. There is no question they made some of the most memorable songs in history. But you oftentimes have to wade through a lot of marginal ones to find them.

Your feedback for Use Your Illusion II