Nevermind (studio album) by Nirvana (US) 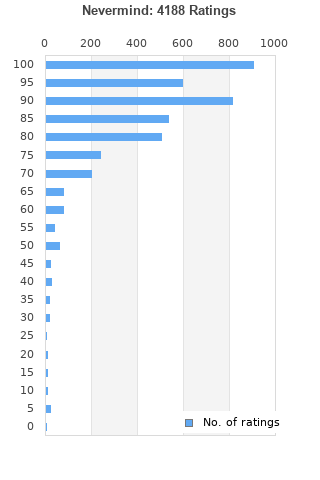 Nevermind is ranked as the best album by Nirvana (US). 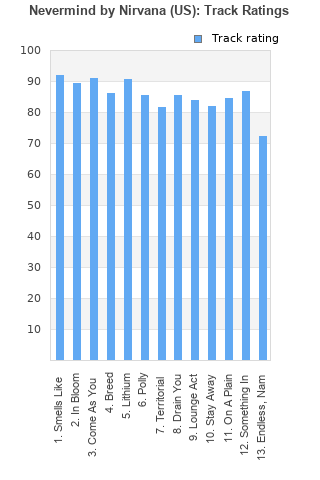 Rating metrics: Outliers can be removed when calculating a mean average to dampen the effects of ratings outside the normal distribution. This figure is provided as the trimmed mean. A high standard deviation can be legitimate, but can sometimes indicate 'gaming' is occurring. Consider a simplified example* of an item receiving ratings of 100, 50, & 0. The mean average rating would be 50. However, ratings of 55, 50 & 45 could also result in the same average. The second average might be more trusted because there is more consensus around a particular rating (a lower deviation).
(*In practice, some albums can have several thousand ratings)
This album is rated in the top 1% of all albums on BestEverAlbums.com. This album has a Bayesian average rating of 86.6/100, a mean average of 85.2/100, and a trimmed mean (excluding outliers) of 86.7/100. The standard deviation for this album is 15.8.

One of the all time greatest alternative rock albums. It is far more than just the hits in the first half, there is so much depth with Cobain keen to show the different ways in which he can write songs within the genre.

Arguably the greatest opening 3 track run to ever start an album! (Smells Like Teen Spirit, In Bloom, and Come As You Are)

31 years gone and still rocks. With that great drumming, dark and thick guitars, this is a classic

My favorite tracks are not the biggest hits, which are also good. Smells Like Teen Spirit is on my list of great songs I can't listen to anymore.

Top tracks: On A Plain, Dain You, Lounge Act, Breed

You can hear the pain in Cobain's amazing voice. As tragic as the next few years were, you can't help but feel it helped contribute to this classic. Obviously Come As You Are, In Bloom and Smells Like Teen Spirit are great (maybe the best 3 opening tracks to an album ever? Either this or the Joshua Tree, it's close), everyone knows that, but Drain You, Something In The Way and Polly are also highlights for me.

"I'm living off grass, And the drippings from the ceiling, It's okay to eat fish, Cause they don't have any feelings" - Something In the Way. One of my favourite songs lyrically of all time.

Never gets old. Every song is amazing (yes, even Endless, Nameless.) When I think of a perfect, infinitely re-playable album, I think of "Nevermind" by Nirvana.

This album changed everything, maybe more than any single record I can remember. An entire genre of music (hair metal) was essentially wiped off the map seemingly overnight.

And yet, Nevermind doesn’t quite hold up. Maybe it was just how overplayed it was. I do know that the 2nd half of the album is more enjoyable today, just because that’s the side that didn’t house all the singles.

I never really know how to talk about this album, because it turned into something that it was never artistically intended to be. Lithium was an anthem for my teenage years, but as an adult I feel odd jamming to a grunge anti-consumerism piece that somehow became a commercial juggernaut. If you live under a rock and have never heard it, go check it out obviously.

Your feedback for Nevermind