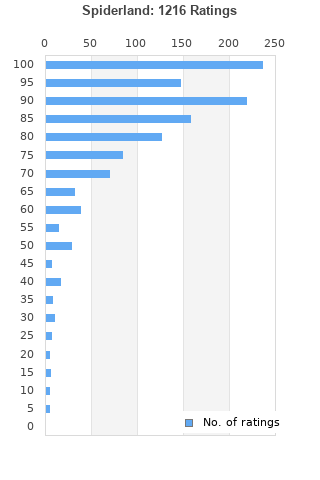 Spiderland Slint CD
Condition: Brand New
Time left: 6d 18h 57m 37s
Ships to: Worldwide
$24.95
Go to store
Product prices and availability are accurate as of the date indicated and are subject to change. Any price and availability information displayed on the linked website at the time of purchase will apply to the purchase of this product.  See full search results on eBay

Spiderland is ranked as the best album by Slint. 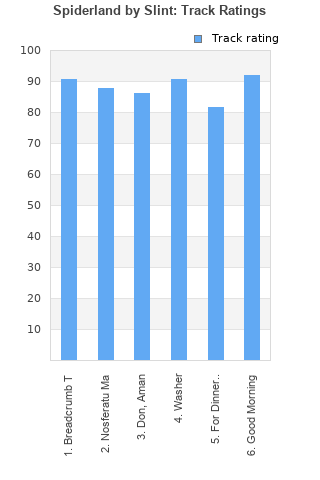 Rating metrics: Outliers can be removed when calculating a mean average to dampen the effects of ratings outside the normal distribution. This figure is provided as the trimmed mean. A high standard deviation can be legitimate, but can sometimes indicate 'gaming' is occurring. Consider a simplified example* of an item receiving ratings of 100, 50, & 0. The mean average rating would be 50. However, ratings of 55, 50 & 45 could also result in the same average. The second average might be more trusted because there is more consensus around a particular rating (a lower deviation).
(*In practice, some albums can have several thousand ratings)
This album is rated in the top 1% of all albums on BestEverAlbums.com. This album has a Bayesian average rating of 84.3/100, a mean average of 82.8/100, and a trimmed mean (excluding outliers) of 84.4/100. The standard deviation for this album is 17.5.

One of the very few albums that hits so hard I am unable to move or speak for about a full minute after that final chord. An emotional gut punch, incredible stuff.

The legendary ‘Spiderland’ is remarkable for a few reasons

Firstly how young Brian and Britt were when they recorded this album in 1990 being 20 and 21 respectively. When you watch the band demoing these tracks in Britts basement the footage shows skinny kids playing their instruments

Also how quickly ‘Spiderland’ was actually recorded, they literally went into the studio on a Friday evening and by Sunday they were done. 2 days Boom !

Finally the music here quite rightly gets a lot of kudos but lyrically it’s interesting stuff. “Breadcrumb Trail” is about being stuck on a Rollercoaster with a Fortune Teller , “Nosferatu Man” a vampire , “Don, Aman” a character with social anxiety , “Washer” love and relationship lost and “Good Morning, Captain “ .. something about reflecting upon ones youth

Just randomly decided to listen to this cause I thought the artwork was intriguing, I had no clue it was critically acclaimed but I can see why

This album is so dark that their members went to different Pyschologists to get their heads cleaned out... I couldn't imagine their nightmares after they finished the recording

Your feedback for Spiderland