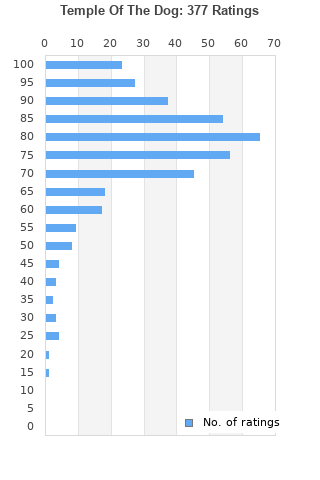 STILL SEALED~CHRIS CORNELL~WHEN BAD DOES GOOD~STARGAZER (Temple Of The Dog)~2018
Condition: New
Time left: 8h 26s
Ships to: Worldwide
$24.98
Go to store
Product prices and availability are accurate as of the date indicated and are subject to change. Any price and availability information displayed on the linked website at the time of purchase will apply to the purchase of this product.  See full search results on eBay

Temple Of The Dog bestography 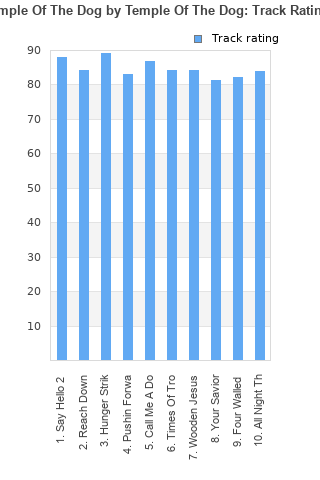 Temple Of The Dog rankings

Temple Of The Dog collection

Temple Of The Dog ratings

Rating metrics: Outliers can be removed when calculating a mean average to dampen the effects of ratings outside the normal distribution. This figure is provided as the trimmed mean. A high standard deviation can be legitimate, but can sometimes indicate 'gaming' is occurring. Consider a simplified example* of an item receiving ratings of 100, 50, & 0. The mean average rating would be 50. However, ratings of 55, 50 & 45 could also result in the same average. The second average might be more trusted because there is more consensus around a particular rating (a lower deviation).
(*In practice, some albums can have several thousand ratings)
This album is rated in the top 3% of all albums on BestEverAlbums.com. This album has a Bayesian average rating of 78.3/100, a mean average of 77.1/100, and a trimmed mean (excluding outliers) of 78.5/100. The standard deviation for this album is 15.4.

Temple Of The Dog favourites

Temple Of The Dog comments

One of my best records ever. Dubut Eddie Vedder on vocal and amazing Chris Cornell.

My below comment still stands. How is this record rated a 77 but the song score average is at 84? Listen again and get back to me.

Can't help but feel this is slightly underrated on this site. Cornell's best album vocally.

Still one of the best alt rock, grunge and 90s albums. Severely underrated. RIP Andy and RIP Chris, so many legends have left us

Important step for the formation of Pearl Jam, while Cornell's songwriting was improving. You can hear both Soundgarden's and PJ's footprint, but their 1991 albums would have been much better.

Great tribute album, but only the first four tracks impressed me.

So intense. Chris Cornell at his best.

Temple of the Dog is one of the best albums since 1990. By far. I love essentially every moment of this album. Unreal how a simple project made by friends from different bands had SO much chemistry. This album captures the spirit of grunge, all the while giving it a slightly more musical sensibility.

Also, this might be Chris Cornell's vocal peak album-wise. And that is saying a lot.

Have to concur with all of the positive comments about this album. Vocals are amazing. It had been a long time goal of mine to see Soundgarden live and finally got to see them this year supporting Black Sabbath. CC's vocals were incredible. A truely great rock voice.

A great tribute album to the deceased Mother Love Bone front man Andrew Wood and one of the most passionate albums to come out of the 90's. Vedder & Cornell make a great duo.

Your feedback for Temple Of The Dog